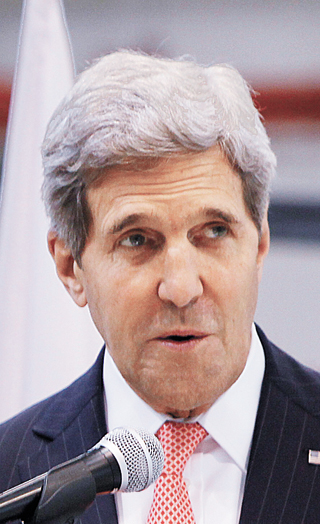 U.S. Secretary of State John Kerry will visit Seoul on Sunday on a two-day stay and meet with President Park Geun-hye at the Blue House. The top U.S. diplomat will also meet his South Korean counterpart Yun Byung-se during the trip.

News of Kerry’s visit this weekend came after it was also reported that President Park would visit Washington for a summit with U.S. President Barack Obama in mid-June. The two sides are still coordinating schedules.

His visit also comes after North Korea showed off its new submarine-launched ballistic missile (SLBM) capabilities on Friday, with leader Kim Jong-un personally supervising the scene near Sinpo on the northeastern coast of North Korea.

South Korea’s Defense Ministry said the missile fired from the submarine was a dummy modeled after a Russian SLBM and could likely have only flown in the air less than 100 meters (109 yards).

Still, concerns have arisen as to whether Seoul could counter Pyongyang’s surprise strikes from under water, which makes the task of detecting and intercepting such projectiles much more challenging than with conventional ground missiles.

In light of the regime’s latest test, Kerry is expected to discuss ways to bolster military cooperation between South Korea and the United States to counter submarine attacks, such as extending the scope of shared military intelligence.

Washington’s top diplomat is also expected to consult with President Park and Foreign Affairs Minister Yun to seek ways to bring a belligerent North Korea back to the long-stalled six-party talks to resolve the gridlock over its nuclear program.

The talks were originally formed with the two Koreas, Japan, Russia, China and the United States with the aim of convincing Pyongyang to abandon its nuclear ambitions and to resolve security concerns on the Korean Peninsula. North Korea pulled out of the talks late 2008.

Kerry will arrive in Seoul on Sunday following a two-day stopover in Beijing, where he will meet “senior members of the Chinese government to advance U.S. priorities ahead of the Strategic and Economic Dialogue this summer and the planned visit by President Xi Jinping to the United States this fall,” according to the State Department.

His visit also comes amid growing worries in Seoul that it is being left out in the cooperative framework pushed by Washington, which stepped up its relations with Tokyo in what many see as efforts to contain Beijing’s rising prominence in the region.

In that regard, analysts have speculated that Obama will recommend during President Park’s visit next month that she mend ties with Japanese Prime Minister Shinzo Abe.