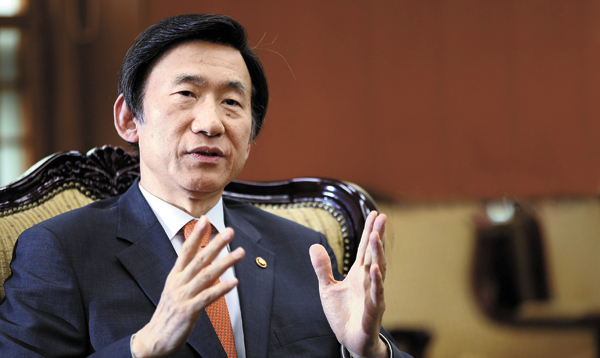 Amid concerns that South Korea’s diplomatic relations are adrift, Foreign Affairs Minister Yun Byung-se sat down with the JoongAng Ilbo on Friday at the Ministry of Foreign Affairs in central Seoul.

Yun said he thought he needed to give some explanations about the situation and predicted the future of the country’s diplomatic relations will brighten as some progress is expected over issues pending with Japan.

Q. A frequently heard criticism is that South Korea’s diplomacy is too passive.

A. The Park Geun-hye administration launched on the idea that the Korean Peninsula and Northeast Asia were going to confront a solemn diplomatic situation. Given that we’ve established strategies based on such a concept, it doesn’t feel right when we are criticized for lacking diplomatic acumen or strategies.

While we are trying to see the part of the iceberg beneath the surface, the public has criticized us after seeing the part above the surface. We must worry about an actual threat that could come from other areas. This often applies to the relationship between Korea and Japan.

But it is still true that there are such criticisms and we accept them anyway. A great potter knows whether a product is made well, even before others comment on it.

What do you think of the criticism that South Korea should adapt a two-track strategy, separating historical issues from other issues in dealing with Japan?

We’ve held on to the two-track strategy - which means we respond decisively to historical issues and share interests in the North Korean nuclear issue and so on - from the beginning of the current government. However, we’ve seen overly negative results on historical issues, and it affected the other track as well. Demanding Japan keep the promises and statements made by previous leaders is the least of what we can do.

Of course, we are flexible in some ways. We did not have a Korea-Japan summit for a while, but we had a trilateral summit with the United States [and Japan] in March last year at the Hague. At the APEC summit in Beijing in November, President Park sat next to Japanese Prime Minister Shinzo Abe and talked to him for about two hours. It’s been said that they only had formal conversation, but they also talked about some serious topics, too.

The president herself is aware of the general diplomatic situation and she naturally has conversations when she meets [Abe] at international events. She isn’t typically reluctant to talk to Abe, but a Korean-Japan summit can only happen when Park is expected to deliver what people want on pending issues, including the “comfort women” issue during World War II.

Must we wait for Abe’s statement on the 70th anniversary of Tokyo’s surrender to see improvement in the two country’s relationship?

It might seem that [the government] isn’t making progress rapidly, but we have shared a variety of understandings [with Japan]. We don’t need to look far ahead to see some progress on some pending issues. We are currently seeing a decrease in negative factors and an increase in positive factors, as foreign affairs authorities are working hard and many civic groups are supporting it, too. We may expect a high-ranking meeting sometime.

It seems difficult to expect a Korea-Japan summit before June 22, the 50th anniversary of the normalization of diplomatic relations between the two countries.

Since Abe has secured his political ground domestically and made some achievements on his visit to the United States, he is increasingly able to pay attention to diplomatic relations with neighboring countries.

Former U.S. President Richard Nixon could mend fences with China because he was a conservative person and a Republican, and I believe Abe should do the same. In that case, South Korea will surely and definitely respond to that.

Are you still sticking to the principle that solving historical issues is a precondition for a Korea-Japan summit?

We don’t mean that we will make moves only when everything is solved. Some issues are difficult to solve, but we can take a long-term approach there, and we can also focus on other issues for a short period of time.

Is the comfort women issue a short-term problem?

We’ve already had seven director-level meetings on the issue and we can convene even higher level talks. When the diplomatic relationship is tangled with problems, our priority is to find a trigger that can begin resolving them.

When it comes to the comfort women issue, what response from Tokyo can we be most satisfied with?

The Japanese government already knows it: confirming the Murayama and Kono Statements without exception and putting them into action. It’s notable that Prime Minister Abe twice said he would uphold the previous statements when he visited the United States, but that’s not enough. If he ensures that he will take other measures, not just Korea and China, but also the United States, will welcome the decision.

Did Kim Jong-un cancel his visit to Russia because he is considering visiting China?

I don’t think that’s the reason. Given his circumstances as the North Korean leader, it is possible that he asked for security services or formalities. Also, the North may have asked for some other support because it is economically and diplomatically isolated.

Another possibility is that he felt anxious about attending a multinational event because he’s never been to international events before.

If it is really because he is visiting China soon, Russia would be very upset. It is a serious discourtesy to cancel a visit when the event was less than two weeks away. I can understand how Russia would feel about it.

Is the “strategic ambiguity” about the Terminal High Altitude Area Defense (Thaad) system from the Foreign Affairs Ministry?

It was never discussed in the ministry and I think it’s from a national defense meeting. But I heard that that was only a term to explain a certain possibility and it did not mean that the government will have a strategically ambiguous attitude toward it.

The basic attitude of the authorities, including the National Security Council, is the “3 Nos,” which means no request has been made, no discussion has been held and no decision has been made. An important thing that we shouldn’t miss is that the key issue here is the North Korean nuclear and missile threat.

What is important about President Park’s visit to the United States in June?

What can you say about the improvements in the relationship between China and Japan?

Unlike what others insist, better Japan-China relations correspond with our diplomatic goals. Therefore, we are planning to encourage such improvements. We don’t want to see a new Cold War among the United States, Japan and China. Also, China voluntarily told us that they would hold the summit and explained the results afterward.