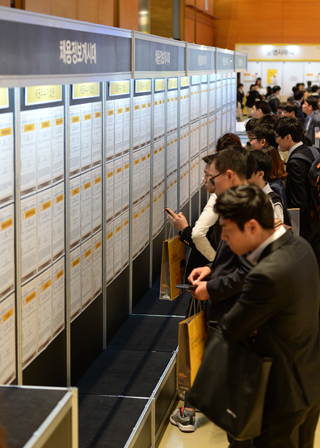 Nearly 13,000 people gathered Wednesday morning at COEX Convention Center in southern Seoul in the hopes of being a part of the lucky few to nab one of the vacant positions offered at the annual job fair held by KB Kookmin Bank.

The job seekers, who ranged from teenagers clad in school uniforms to retired parents in well-ironed suits, practiced one-minute speeches in an effort to land just the right job with just the right employer.

“Now it’s like an annual event for our school’s seniors to come to this job fair to get a job before graduation. Our entire class came here today,” said Lee Jin-ah, a senior majoring in accounting at Sunil e-Business High School. “I saw many [recent graduates] get hired at good midsize companies that … are quality workplaces.”

Lee added that she will submit her resume and do preliminary interviews with several companies for which she has been recommended at the job fair, and hopes to start working in the second semester this year.

The fifth annual KB Good Job, a job fair held by KB Kookmin Bank, kicked off on Wednesday at COEX Convention Center in southern Seoul to serve several thousands of job seekers from all generations, including vocational high school students, college graduates, soldiers waiting to be discharged, young mothers and those in the older generation who recently retired.

With 250 small and midsize enterprises (SMEs) participating in the fair, the bank estimated that at least 30,000 job seekers would visit by today.

The job fair aims to encourage people of all ages to join the work force while assisting Korea’s many SMEs - which have long suffered from a shortage of manpower - find the talent they’ve been seeking, according to the bank.

KB also provided a job consulting and training program, which offers an interview clinic and career consulting to some 3,000 recent college graduates and soon-to-be-discharged soldiers annually in collaboration with the local job portal Incruit and the Ministry of National Defense.

Shim Young-bo, a 29-year-old who majored in computer science, recently joined Atec, an automated public transportation payment solution developer, this year after completing a course at KB’s job training program, which he discovered at the fair last year.

“My first year of job seeking was hard because I was on my own and the only information I could get about companies was from online job portals and each company’s website,” Shim said. “Even though the companies here aren’t well-known conglomerates, I hope job seekers won’t disregard them,” Shim added.