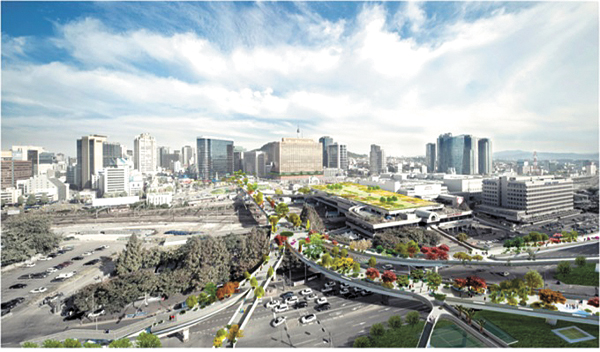 An overpass next to Seoul Station that is set to become an elevated park is to be envisioned as a massive tree, connected to 17 adjacent footpaths.

The Seoul Metropolitan Government announced on Wednesday that the winner of the competition for the project to turn the Seoul Station Overpass into an elevated park was Dutch landscape architect Winy Maas for his submission titled “The Seoul Arboretum.”

The city government introduced Maas as one of the world’s most renowned architects and the founding president of the MVRDV.

The architectural studio has been recognized for its creative collaborations, such as the Grand Paris Plus Petit ? a project commissioned by former French President Nicolas Sarkozy that challenged 10 architectural and urban planning teams to envision a 2030 Paris ? as well as its work on the Netherlands Pavilion at the 2000 World Expo in Hannover, Germany.

The Seoul Arboretum conceives the overpass as a giant tree, with the 17 ramps to its sidewalks as branches, which the designer explained would reconnect the city’s fragmented central area. The project also suggests planting domestic trees organized according to the Korean alphabet and placing stones with corresponding explanations to make it a more attractive place for visitors and pedestrians.

“[I chose the word ‘arboretum’] because when it comes to species that will be selected, I [didn’t want to specify]. I wanted all of them,” the 56-year-old Dutchman said. “I want it to be starting point for the process of making a collection. It’s fantastic and it’s like a museum.”

While the plan, initiated by Seoul Mayor Park Won-soon, has been challenged by some locals, particularly merchants from Namdaemun Market located just east of the overpass, the Dutch architect openly defended the city government’s plan to renovate one of Seoul’s traditional areas.

“I’m aware of the mayor’s intention for the city’s architecture … [to make it] better, greener and more livable in the project,” Maas said. “I think it’s courageous, and there might be criticisms here and there, and I’m here to defend that policy because I do think the improvements will [inspire awe].”

The local government further explained that the plan was not fixed and would be finalized through hearings with the public and consultations with experts across different sectors.

The city government will discuss coverage for the project and plans to sign a contract with the designer in June.

The design will be displayed in the lobby of Seoul City Hall from May 18 to June 1, as well as on its webpage.

After Mayor Park announced in September renovation plans for the Seoul Station Overpass, the city government invited seven designers from inside and outside the country to compete in a bidding process.

The seven artists including Maas submitted their own solutions for the reform, and a panel of five judges led by Seoul’s City Architect Seung Hyo-sang, unanimously selected Seoul Arboretum as the winner.

Seung explained that the group primarily focused on the artist’s interpretation of the area; the design’s harmony with the surrounding area; the preservation and reconstruction of the overpass; and the program itself.

The Seoul Arboretum “was supported by the judges given that it proposed the possible expansion of green space around Seoul Station and that it emphasized the process of bringing [the park] together,” Seung said.

Architect Joh Sung-yong came in second for his design “The Seoul Station Overpass: Walkway for All,” trailed by architect Cho Min-suk with his submission, “Continuous Landmark: Unified Hyper-Collage City.”

For over 40 years, the overpass provided a thoroughfare from Namdaemun Market to the east, across the station, and to areas in the west.