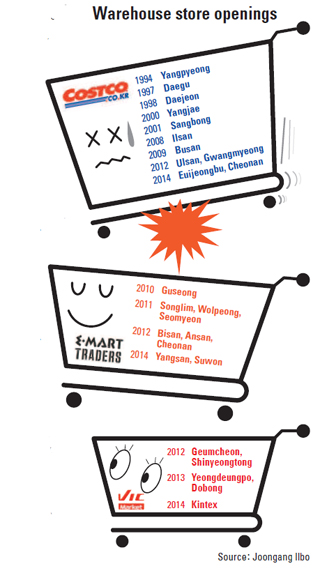 Costco, the leading warehouse store operator in the country, will soon have to find new locations for its stores in Daegu, Daejeon and Yangpyeong in Seoul, as the landlord, Shinsegae, has refused to renew the lease contract, according to sources.

“The lease expires at the end of 2018, and we recently heard from Shinsegae that they will not renew the lease contract,” said a Costco Korea official.

“We are preparing to relocate or even close our stores in Seoul’s Yangpyeong, Daegu and Daejeon,” the official said, adding that Costco has asked that its 120 billion won ($110 million) security deposit for the lease be returned.

Shinsegae said, “Nothing has been decided regarding the Costco contract.”

Costco’s Yangpyeong store is where Shinsegae originally opened a warehouse store in 1994 in collaboration with Price Club, which was a pioneer of the warehouse store in the United States. But during the Asian currency crisis in the late 1990s, Shinsegae, which was burdened with heavy debt, handed the store over to Price Club to secure more liquidity.

Price Club later was acquired by Costco, which has seen exponential growth.

Shinsegae could not just sit back while Costco was raking in profits. Since opening its first warehouse store, E-Mart Traders, in 2010, Shinsegae has been expanding with firm backing from group Vice Chairman Chung Yong-jin.

There are nine E-Mart Traders across Korea, and Costco has 11 stores. Shinsegae is said to be planning to renovate the three stores to be vacated by Costco and reopen them as its own warehouse brand. If the plan proceeds accordingly, E-Mart would have 12 warehouse stores and Costco eight (assuming that Costco does not find new locations).

Costco is said to be mulling moving its Daegu store to the new Daegu innovation city and its Daejeon store to Sejong City in South Chungcheong.

The clash between the two was seen as inevitable. E-Mart’s CEO until last year held a board seat at Costco Korea, but the seat is now occupied by Shinsegae Group’s social responsibility executive as the discount retailer distances itself from the U.S. warehouse store operator.

The 3.3 percent stake E-Mart owns in Costco Korea is likely to be sold.

Shinsegae is pushing to expand its warehouse business as the sector is seen as having room for growth.