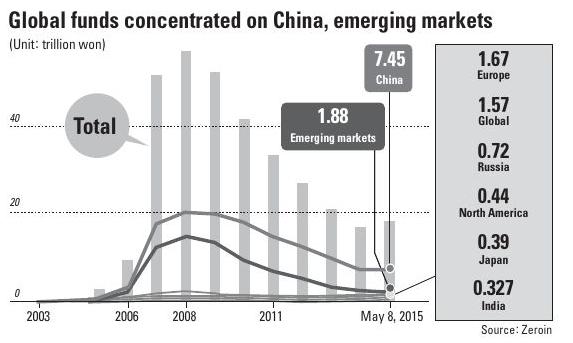 Koreans invested a total of $716.6 billion (roughly 780 trillion won) overseas last year, including retail and institutional investors, according to an estimate by the Bank of Korea. That’s the largest amount Korean investors have ever made abroad.

But overseas fund investments have been shrinking since hitting a peak of 56.7 trillion won in 2008 and were 16.3 trillion won last year.

But this year, 18.7 trillion won has been invested in overseas funds so far. What’s going on with the overseas fund investment market?

The reason overseas fund investments have so little interest to Korean investors is because of China. Korean overseas funds are heavily concentrated in China. On average, Chinese investments account for 35 percent of the total and in 2012 the figure was 48 percent.

“It’s rare that equity investments in a single country account for so much in an overseas fund, which can invest not only in equities and bonds around the world but also various raw materials,” said Hwang Yoon-ah, a reseacher for financial information provider Zeroin. “Even when considering how China is geographically close and the amount of investment information available, the concentration on China by funds is excessive.”

In 2007, a tax exemption on profits made on Korean stock investments was extended to overseas stocks. As a result, the overseas fund market in Korea, which was worth roughly 9.16 trillion won in 2006, surged to 51.7 trillion won the following year. In 2007, a bullish Chinese market encouraged Korean investors to climb on the bandwagon. On the last day of 2007, the Hong Kong stock market closed at 27,812.65, which was 39.3 percent higher than the end of 2006.

In other words, Korean investors invested in overseas funds with any spare money they had after investing in safer assets such as real estate, bank deposits and bonds. They concentrated on emerging markets offering higher returns.

“When the local overseas’ fund market started to grow in the early and mid 2000s, the BRICs - Brazil, Russia, India and China - showed stronger growth than advanced economies,” said Chang Chun-ha, senior researcher at NH Investment and Securities. “It’s natural for money to be attracted to markets on the rise.”

But after reaching its peak in November 2007, the Hong Kong stock market tumbled. This gave the notion to Koreans that investing in overseas funds was dangerous. The speed with which Chinese fund investments shrank was gradual.

“As the loss that [Korean] investors suffered was so large and at such short notice, they weren’t able to withdraw their investments immediately,” said Cho of Korea Investment Management. “It was only after the Chinese market started to recover and their losses were somewhat recouped that they started to wind down their investments, which caused total investments in Chinese funds to downsize little by little.”

Since the global crisis, Korean investors have started to turn their interest to funds investing in bonds. “Bond prices went up when interest rates dropped as the U.S. Fed started quantitative easing,” said Shim Seung-ah, head of the Shinhan Investment Corporation’s fund department. “The reason global bonds were popular is because they had a higher profit return than Korean bonds.”

Since 2013, funds investing in advanced economies have grown significantly. Those funds earlier only accounted for 2 to 3 percent of the total funds investing in overseas markets. In 2013, the figure grew to 5 percent and today it has expanded to 13 percent.

“The Insight Fund, which we started in 2007, at first was largely focused on investing in China but today 60 to 70 percent is in the United States,” said Lim Deuk-jin, an executive at Mirae Asset Management.

Among advanced economies, those investing in Europe have gained wide popularity. So far this year, 1.6 trillion won has poured into European funds.

That accounts for 66 percent of the funds investing in advanced economies, including North America and Japan.