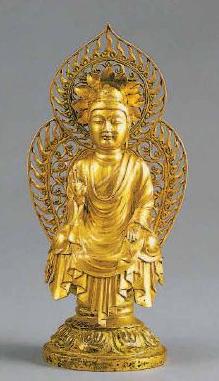 This tiny statuette is one of the two gold Buddha images - the other being the standing Buddha designated as National Treasure No. 80 - discovered at a Buddhist shrine excavated from the Three-Story Stone Pagoda at Hwangbok Temple site in Gyeongju (National Treasure No. 37) when it was demolished and rebuilt in 1934.

According to an inscription engraved at the site, a gold Amitabha statuette was put in it in 706, leading some historians to believe that this is that Amitabha.

Some raise doubts since the Amitabha is 6 inches tall according to the inscription, whereas the height of this seated Buddha is only 12.2 centimeters, or shorter than 4 inches.

The statuette consists of three parts: the mandorla (Buddhist halo of light), Buddha’s body and the lotus pedestal, designed to be detached from each other.

This statuette is regarded as a very valuable source for the study of early eighth-century Korean Buddhist sculpture.