If Jang didn’t swing, it was a ball

If Jang didn’t swing, it was a ball

Teammates congratulate Jang Hyo-jo after his KBO home run against the OB Bears on April 10, 1983. Jang, right, smiles after winning the best hitter prize at the KBO All-Star Game in 1985. [JoongAng Ilbo]

When discussing baseball’s best contact hitters, Americans might talk about Tony Gwynn and Japanese fans would pick Ichiro Suzuki. In Korea, there is the late Jang Hyo-jo.

With nicknames like “the batting master” and “hit maker,” Jang remains the best hitter in Korea Baseball Organization history with a batting average of .331 and on-base percentage of .427 over his 10-year professional career.

Jang was born in Busan, but spent much of his life in Daegu, where he went to school and began his professional career with the Samsung Lions. 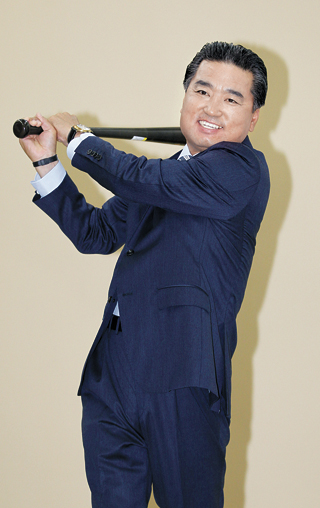 Jang started playing baseball in the fourth grade at Samduck Elementary School in Daegu. But his life changed when his father died during Jang’s time at Daegu Middle School. Jang recalled his father’s death as his prime motivation to become the best player he could be throughout his career.

After going to Daegu Commercial High School (now Daegu Sangwon High School) in 1972, Jang started to emerge as a star. In 1973, his school won local tournaments like the President’s Cup, as well as the Golden Lion Flag and Phoenix Flag where he was the leading hitter.

In 1974, Daegu Commercial won the Phoenix Flag and President’s Cup, and Jang again led the way.

“He was small compared to other students, but he overcome that disadvantage through practice and training,” said Kang Tae-jung, Jang’s high school coach, in a 2011 interview with Ilgan Sports, a Korea JoongAng Daily affiliate. “He also had a keen sense of the game and was very quick.”

By the time he went to Hanyang University in 1975, Jang was a member of the national team. The following year at the White Tiger Flag baseball tournament, Jang again was the top hitter with a .714 average, including four straight doubles.

“He didn’t cut corners,” said Kim Han-geun, a former Samsung Lions coach who played with Jang starting in middle school. “Once he grabbed a bat, he didn’t stop until he took at least 100 swings.”

Jang went to the amateur team of Pohang Iron and Steel Company after graduating in 1979, later recalling that Chairman Park Tae-joon was one of his fans.

After finishing his military duty, Jang was supposed to join the KBO when it started in 1982, but he delayed his debut to participate in the Baseball World Cup in Seoul, which Korea won. He eventually joined the Samsung Lions in 1983.

Some doubted whether Jang’s stellar amateur performance with aluminum bats would transfer to the professional level where wood bats were used. But it was no problem for Jang, who recalled that he just had to work harder.

Shockingly, Jang didn’t win the rookie of the year award as some judges though he was “too old and experienced to be considered a rookie.”

The following year, Jang changed his batting style from slugger to contact hitter by choking up on the bat.

Jang’s .324 average in 1984 was not good enough to win the batting title, but he won three consecutive crowns from 1985-7 and cemented his status as the league’s best hitter. Even more impressive was leading the league in on-base percentage for five straight years from 1983-7.

“He was really a great batter,” said Hanwha Eagles manager Kim Sung-keun, who has 40 years of coaching experience. “When he felt his batting sense wasn’t good, he just fouled off pitches and looked for a base on balls.”

Since his eyes were so good for selecting strikes and balls, KBS commentator and former KBO Secretary General Ha Il-sung remembers umpires saying, “If Jang doesn’t hit it, it’s a ball.”

Jang was becoming a franchise legend and won his only KBO MVP award in 1987, so Lions fans were shocked after the 1988 season when he was traded to the Lotte Giants. Lions management said the team needed a fresh start after losing to the Haitai Tigers (now Kia Tigers) in the Korean Series two straight years. According to Jang, the real reason was friction related to salary negotiations.

“Jang told me he would retire after he failed to hit .300,” said then Giants manager Kang Byung-chul. “But I told him to show fans that he could still hit before he left, and he did it by becoming the runner-up in batting [.347] in 1991. When he said he retired at the end of the 1992 season, I didn’t stop him.”

After retiring, Jang worked as a hitting coach with the Giants for six years and went to the Lions’ minor team in the same role in 2000, but his contract was not renewed the following year.

Jang returned to the Lions again in 2005, this time as a scout. In 2009, he moved to the Lions’ minor team again as batting coach and in 2011 was promoted to manager.

“He could be brusque, but his affection for baseball and players was just exceptional,” said Lions shortstop Kim Sang-su, whom Jang coached in the minors.

On July 23, 2011, at the KBO All-Star Game, the right fielder was voted one of 10 KBO All-Star Legends. No one suspected it would be his last public appearance. Soon after, he was diagnosed with liver cancer that had spread to his stomach. Jang passed away the morning of Sept. 7, 2011.

“He was born with a gift for hitting, but what made him a master was his diligence and hard work,” said former Giants manager Kim Si-jin, a teammate of Jang’s with the Lions. “He always took batting practice after the game.”