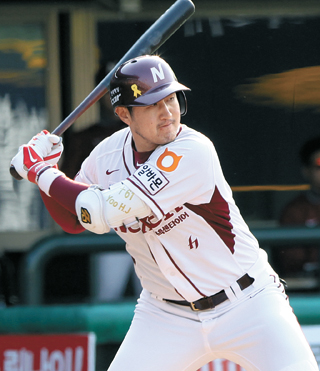 The Nexen Heroes, the Korea Baseball Organization (KBO) runner-up last year, were expected to have a tough time this season after losing Kang Jung-ho to the Pittsburgh Pirates and reigning league MVP Seo Geon-chang to injury.

But as of Monday, Yoo Han-joon was the league leader in batting average (.387) and slugging percentage (.754). The 33-year-old outfielder also ranks near the top in on-base percentage, RBIs and hits.

While fans and teammates say he doesn’t receive as much attention as he deserves, that doesn’t bother Yoo, who made his KBO debut in 2005 with the now-defunct Hyundai Unicorns.

Among fans and players, Yoo is known as being polite and disciplined. Heroes officials say the Dongguk University graduate is a player who never needs to be scolded or asked to do something, because he just does the job himself.

After this season Yoo will be a free agent, and KBO clubs are watching him, but in an interview last week with Ilgan Sports, a Korea JoongAng Daily affiliate, Yoo says he is focused only on working hard on what needs to be done for the team and fans.

Yoo missed a game over the weekend with a sore wrist, but plans to be back in the lineup this week for games against the Samsung Lions and SK Wyverns.

Q. Since last year, you have become the team’s key hitter and emerged as one of the top outfielders in the KBO. What’s the reason?

A. In 2014 spring training, I found my “batting sense.” I can say that I have discovered my hitting point in a mechanical way. I can’t say more because it’s my secret, but through the preseason games I maintained and remembered that sense which led to a good performance last season.

You are someone who seems to play better after bulking up.

When I was in a slump, I noticed our team had changed a lot. I found many young players becoming competitors and thought that if I couldn’t make an impact for the team, I would fall behind. I’m not a man who easily gains weight, but I thought that was the only way. I received a menu from trainers and started eating only sweet potatoes and chicken breasts. I have bulked up my body for two months and it looks like the power is coming along.

Considering your performance, you don’t seem to be much of a showman. Your manager and teammates lament that you are underrated. What do you think?

I think excessive showmanship is just not me. I did think about whether I should develop something fancy, but in the end, it isn’t me. My style is to just work hard every day as a professional player. I also don’t take short cuts.

You have this polite and disciplined image. What do you do in your free time? Do you smoke or drink?

Absolutely not. I never drink a glass of beer during the season or smoke. Many people ask me, “Then what’s the fun in your life?” (laughs). But I just don’t like drinking and smoking, and it wouldn’t really help me in exercising. It’s actually related with my daily routine. When the game is finished in the evening, I eat dinner and fall asleep about 1:30 or 2 a.m. I try to sleep eight to nine hours a day. Then I arrive at the stadium between 10 and 11 a.m. I try to keep the same daily schedule.

You seem to be the textbook image of a righteous, polite man.

I was really affected by my father. We even look almost same. But above all, I learned the principles of life from him. My father was an elementary school teacher, who is now retired. He was always a hardworking and diligent man. Maybe this is the reason why I’m called “Mr. Right.”

We heard your older sister is also a teacher.

Yes she is. If I didn’t play baseball, I would have been the teacher. I know my father and my family’s difficulties because of me. My father retired as just a regular teacher and never became a principal. In order to be promoted, he would have had to teach in rural schools and move around, but because I started baseball he couldn’t do it. My father’s vision took a backseat because of me and so did my sister’s. As I played baseball, my family just cared about me. As I think about my family, it makes me want to work harder.

Isn’t that the reason why you don’t drink or smoke?

Of course when you play baseball, it can be hard. But I won’t smoke or drink just because I’m stressed. My family sacrificed themselves to this day because of me. This is a promise that I made to myself: I won’t smoke or drink until I retire. I put my best effort forward in regard to my condition and the opportunity I’m given.

How do you first start playing baseball?

My father was a baseball fan. He liked the Haitai (now Kia) Tigers, so when I was a kid I went to the baseball stadium with him often. I really liked the Tigers; red shirt and black pants then. When I was in fourth grade, I made up my mind to play baseball after seeing the Tigers play in front of a sellout crowd at Jamsil Baseball Stadium. My parents opposed my plan at first, but later I transferred to Sinheung Elementary School, which had a baseball team.

What was your position back then?

First, I was in the infield because I wasn’t that big. I grew a lot in high school. When I was drafted by the Hyundai Unicorns in 2000, I was still an infielder. I decided to play in the outfield when I became a pro, since I thought I lacked throwing accuracy and had some errors. I told the coach that I didn’t see a bright future for me in regard to infield defense. But back then, the Unicorns had lot of good players, so I couldn’t just step in and play. I spent time in the minors and learned about defense in the outfield.


You will become a free agent next year. What’s your expectation?


As I’m a professional player and since it is an opportunity that doesn’t come often, it would be a lie to say I don’t have any expectations. But I think it’s difficult when you stick to a certain amount of money. I think the figures will follow if you work hard in every game you play.


What is your dream?

Well, I have lots of dreams, including becoming a coach. But first, I need to be successful as a player. I really want to do it considering what my family has done for me.