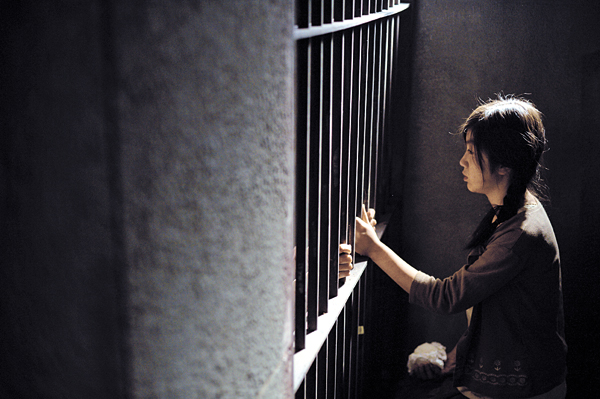 Korean-Japanese teenager Kang Ha-na plays a girl forced into sex slavery by the Japanese Army during World War II in “Spirits’ Homecoming.” Provided by the distributor

The screams of teenage girls being dragged by men in uniform fill the entire hallway of a Japanese military brothel.

This scene is the most crucial from “Spirits’ Homecoming,” which portrays “comfort women,” a euphemistic term referring to the Asian women and girls - mostly Korean - who were sexually enslaved by the Imperial Japanese Army under its country’s 1910-45 colonial rule of Korea and during World War II.

Ten actors and actresses gathered in Daejin University’s gymnasium in Pocheon, Gyeonggi, last month to film the scene for the upcoming movie, portraying the women trying to flee.

The upcoming movie will premiere at a press preview this year on Aug. 15 to mark the 70th anniversary of the Korean Peninsula’s liberation from its neighboring nation.

In response, Japan filed a lawsuit against the production of the film, claiming, “there is no proof that Japanese soldiers took comfort women by force.”

Although the lawsuit reveals the current Japanese government’s denial of its past wrongdoings and its distortion of history - recently highlighted by Japanese Prime Minister Shinzo Abe’s U.S. Congress Speech on April 29 in which he did not properly address the issue of wartime sex slaves - the more the country refuses to accept the truth, the more the reality of what happened is being brought to the world’s attention.

The International New York Times even published an article about the movie in March. 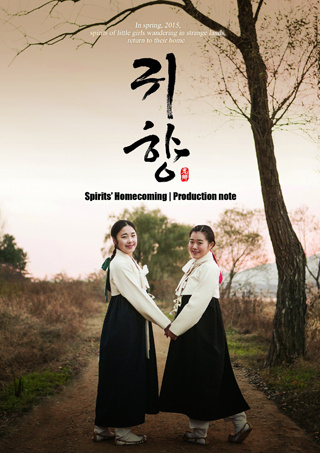 Stills from “Spirits’ Homecoming.” The movie will hold a press preview on Aug. 15, the day that marks 70 years of Korea’s independence from Japanese colonization. Provided by the distributor

Its director, Cho Jung-rae, said he wants this film to act as cultural proof regarding the comfort women issue.

Similarly to “Schindler’s List” (1993), “Life is Beautiful” (1997) and “The Pianist” (2002), all of which shed light on horrors that happened in the past, the upcoming Korean film hopes to contribute to revealing the reality of what happened to these female victims during the Japanese colonial rule and afterwards.

“Spirits’ Homecoming” is different from other movies or documentaries released in Korea that deal with comfort women in that it is almost the first time for such a film to be released commercially.

According to movie critic Kang Sung-ryul, creating a mainstream feature that touches on the issue is important because the younger generation relies heavily on movies to learn about history. 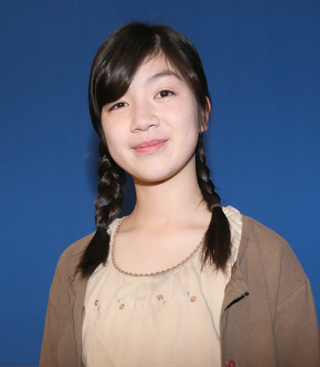 “In this era, where mass media is becoming more and more powerful, a movie could have a bigger influence on students’ knowledge of history than the research findings of scholars,” Kang said.

In “Spirits’ Homecoming,” Jung-min, the main character who goes through the harrowing experience of being a comfort woman, is a 14-year-old girl who was taken from Geochang, South Gyeongsang, to a brothel in China’s Mudan River in Heilongjang.

Before she started shooting, the lead actress, Kang Ha-na, 15, firmly said she was willing to take on any challenge for the sake of the movie.

“I wish for people to understand the pain of the Korean comfort women,” said Kang.

Kang’s great-grandfather and great-grandmother, who were originally from Jeju Island, moved to Japan when Korea was colonized, so her family has been there for almost a century. 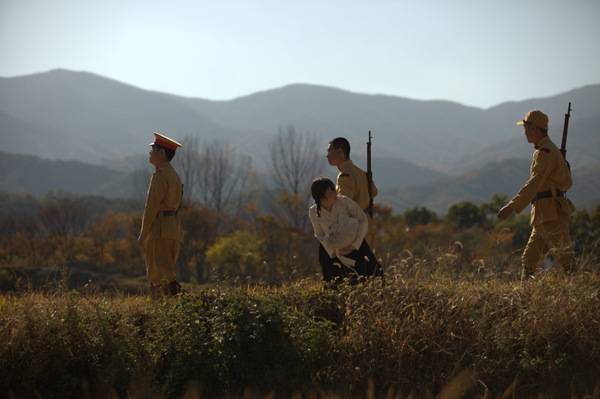 Stills from “Spirits’ Homecoming.” The movie will hold a press preview on Aug. 15, the day that marks 70 years of Korea’s independence from Japanese colonization. Provided by the distributor

The teen, however, does not have any problems communicating in Korean.

The actress is currently in her third year at Joseon Middle School, which, in contrast to regular schools in Japan, teaches unbiased history along with the Korean language.

Kang first heard about the comfort women when two of the 50 victims who are still alive, Kim Bok-dong and Gil Won-ok, visited her school.

After their visit, Kang became more curious about their history.

Just when she wanted to know more about the dark truth, she was lucky enough to have an opportunity to meet director Cho, who visited Japan to look for Japanese-speaking cast members.

During his visit, he met Kang’s mother, who works for the theater Daloreum in Japan, along with its CEO Kim Min-soo.

From the director’s perspective, Kang was the perfect candidate for the film because she had the image he wanted for Jung-min and also had acting experience.

Cho, however, gave her some time to think it over before agreeing to take the role because he felt that some of the scenes in the movie could be too extreme for such a young girl to act out.

He was also concerned about her being targeted by the rising number of right-wing individuals in Japan, where some extreme nationalists cry out that Koreans should be killed.

Despite such concerns, however, Kang decided to take on the role because she said she firmly believes in the importance of spreading the truth about Korean history.

Although she was determined to take on the part of Jung-min, it was still too much for the teenager. She was shocked after seeing the script, which portrays women and girls being forcefully taken into the brothels and people being burned and shot down.

“Just seeing the set made me feel depressed, so it was unimaginable for me to believe that what I was acting actually happened,” said the young actress.

To make matters worse, practicing her role in the movie made life for her very difficult in Osaka, Japan, where protests against Korean people are frequently held. When Kang’s acting in the role went viral on the Internet, she suffered from threatening comments, which left Kim, the theater CEO, worried.

There are five Koreans from Japan, including Kim, who appear in the movie as Japanese soldiers.

“I often face discrimination here, so if I do not intentionally try to have pride in being a Korean,” said Kim, explaining why he wanted to participate in the film. “I found myself wanting to be Japanese.”

The name of the film is in reference to the spirits of the comfort women who could not return home to Korea.

Although a single movie will not be able to cure the suffering of the victims, the director made up his mind to produce a movie about them around 10 years ago, after being shocked by the painting “The Burning of Virgins,” a piece by one of the surviving comfort women, Kang Il-chul.

He kickstarted the production of the film by writing the script, but he could not initiate shooting due to a lack of funding.

However, thanks to money donated by citizens and Korean residents living in Japan, the film was able to start its first filming session.

Additional cash for the production was collected through various measures such as crowdfunding.

Although up to 500 million won ($457,000)was collected through such measures, it still was not enough for a film that required 2.5 billion won to produce.

Fortunately, a few of the actors and actresses were willing to take parts in the movie without pay.

If the film earns a profit, however, it will be distributed among these participants.

Along with them, the majority of the staff members also joined the film without guarantee of pay.

Thanks to the determination of many, the movie will complete its outdoor shooting in Geochang, South Gyeongsang and Yeoncheon, Gyeonggi, by the end of next month.

“If it were a movie with different content, I wouldn’t have skipped school for the shooting,” said Kang.

“It was something that shouldn’t have happened and I hope people who don’t know the history realize the truth after seeing the movie.”

The young actress added that she truly wishes for the audience to be able to empathize with the pain of the comfort women by watching the film.