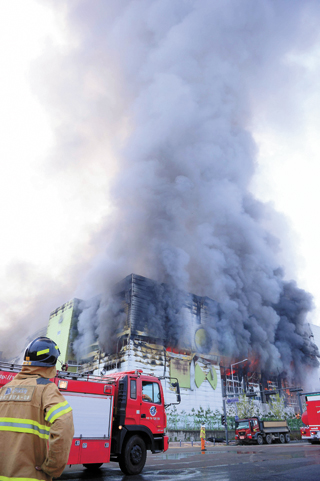 Firefighters struggle to put out a blaze at a warehouse of Cheil Industries in Gimpo, Gyeonggi, on Monday. A security guard in the seven-story building died and arson is suspected. [NEWSIS]

The fire broke out at around 2:10 a.m. and spread from the top floor of the seven-story building in Gochon-eup in Gimpo, Gyeonggi, according to Gimpo police.

The flames started from the seventh floor of the Cheil Industries warehouse, burning through textiles and apparel and spreading all the way to the second floor.

Because Monday was a national holiday, most of the building was empty, but a 35-year-old security guard surnamed Yoon was discovered by rescuers unconscious in an elevator on the sixth floor. He was transferred to a local hospital immediately but was confirmed dead.

Some 880 firefighters and rescue workers were dispatched to the scene and were able to contain the worst of the blaze in three hours and 40 minutes.

However, toxic gas continued to be emitted from the 16,000 tons of apparel and fabric in the building that served as fuel for the fire.

Gimpo police believe the fire was intentional. CCTV footage showed a middle-aged man in an elevator between the sixth and seventh floors carrying a plastic container and butane gas cans around 12:25 a.m.

Butane gas containers were found at the scene of the fire. Police said the suspected arsonist appeared to be a man in his 50s.

“The fire broke out around one to two hours after the man left,” according to a police official. “While there was no image captured of him lighting the fire, the fact that the man was spotted after midnight at the scene leaves open the possibility that he committed arson.”