Avengers in starring role at IT show

Avengers in starring role at IT show

From 3-D printing to Internet-enabled electronic machines, the 2015 edition of the World IT Show opened Wednesday to show off the latest developments in Korea’s IT industry.

The annual event at COEX, southern Seoul, features 1,421 booths by 421 companies, including tech giants Samsung and LG Electronics as well as lesser-known small and medium-sized companies.

This year the theme of the show is “Connect Everything.”

Nonetheless, much attention was directed toward the Samsung Electronics booth that showcases the Iron Man edition of the Galaxy S6 Edge and virtual reality headsets. 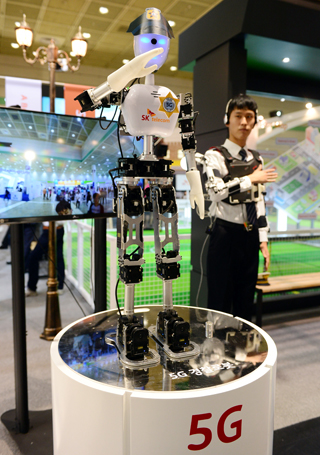 The company began taking orders for 1,000 units of the latest edition Wednesday on its website, prompting the online site to crash due to heavy traffic.

At the exhibition, a number of young people surrounded the glass case displaying the Iron Man-inspired phone and wireless charger accessory with an arc reactor graphic on top.

The overwhelming response was hardly surprising as the country has hordes of fans of the Avengers franchise. More than 10 million tickets for “Avengers: Age of Ultron” were sold in Korea.

But fans in other countries can’t get their hands on the phone since the edition will only sell in Korea for 1.19 million won ($1,077).

Visitors also lined up to experience Samsung’s Gear VR headset. Working with an app titled “Battle for Avengers Tower,” the headset allows users to have a full 360-degree view of an animated battle.

On top of the catchy devices, the company also displayed an Internet-connected industrial printer that enables users to directly print pictures on their smartphones through an attached tablet.

The booth of KT, the country’s second-largest mobile carrier, was modeled after a baseball stadium to promote the company’s new team, the KT Wiz. It demonstrated the Wizzapp, an app for fans. Users can reserve parking spaces and download cheering songs for their favorite players.

Health-related devices on display can test urine and provide results of the paper-based test.

SK Telecom, the country’s largest carrier, showcased its 5G connection, too, through a humanoid robot.

The company said people can remotely control the robot, hoping it could be used in disaster areas.

During the demonstration, a humanoid robot mirrored movements of a person wearing an exoskeleton suit, a function made available thanks to the advanced 5G network.

“The robot can mimic the movement because the powerful network enables the robot to quickly respond,” said Kim Moon-hong, a manager at SKT’s Emerging Technology R&D Center that is in charge of developing 5G technology.