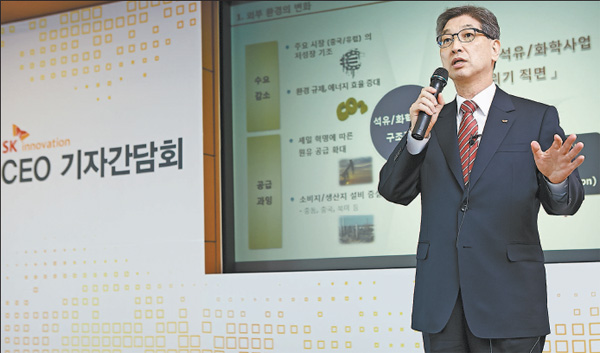 SK Innovation plans to triple its market value to 30 trillion won ($27 billion) by 2018 by diversifying its sources of crude oil, increasing investment in U.S. shale fields and raising its output of high-margin products.

SK Innovation, whose business includes oil refining and chemical manufacturing, said it will expand its shale gas fields near its existing fields in Oklahoma and Texas, which the company acquired last year.

The company will eventually move its exploration and production office to the United States to strengthen its focus on resource development there, the company’s CEO Chung Chul-khil said at a press conference Thursday in central Seoul.

The company also plans to establish more partnerships in China and the Middle East in order to expand sources of crude oil and sales channels.

SK’s joint venture with China’s Sinopec saw 83.6 billion won in profits in the first quarter this year, while SK Global Chemical, a unit of SK Innovation, generated 40 percent of its sales from China in 2014.

SK Innovation managed to report an earnings turnaround in the first quarter after posting a dismal set of numbers in the fourth quarter of 2014, when the company saw 463 billion won in operating losses.

“We will sell nonessential assets and invest more aggressively in areas that are central to our business portfolio,” Chung said, adding that the company will gradually cut outstanding debts that totaled 6.8 trillion won as of the end of the first quarter. Unlisted affiliate SK Lubricants is expected to debut in the stock market in second half of this year.

“We are in talks with a German automaker over a battery supply deal,” said Chung, adding that if the order is placed it would triple the volume of its current outstanding battery orders.

As part of its bid to improve margins, SK Innovation said it will increase the output of high-margin products such as nexlene, a type of high-performance polyethylene, and Yubase lubricants.