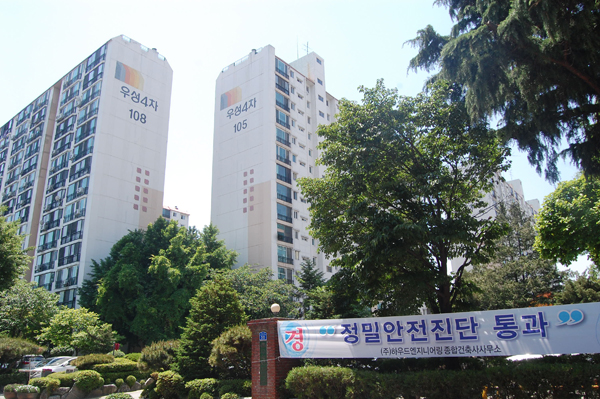 A sign showing that the Woosung 4 Cha apartment was approved for reconstruction placed at the entrance of the apartment complex in Jamsil, southeastern Seoul. [JoongAng Ilbo]

On May 23, despite being a weekend, a significant number of customers made their way out of a store situated in the Jangmi Apartment complex in Jamsil, southeastern Seoul, where some 20 real estate agencies operate.

“There have been growing numbers of inquiries since the redevelopment plan for the apartment has started,” said Kang Oh-nam, who owns a real estate agency. “There are active sales on small and midsize apartments.”

The government recently green lit the redevelopment project on its safety evaluation for Jangmi Apartment, as well as the Woosung 4 Cha apartment complex.

Hanhin 4 apartment complex in Jamwon-dong in Seocho District, southern Seoul, was also given the go-ahead at the end of April on its reconstruction project. 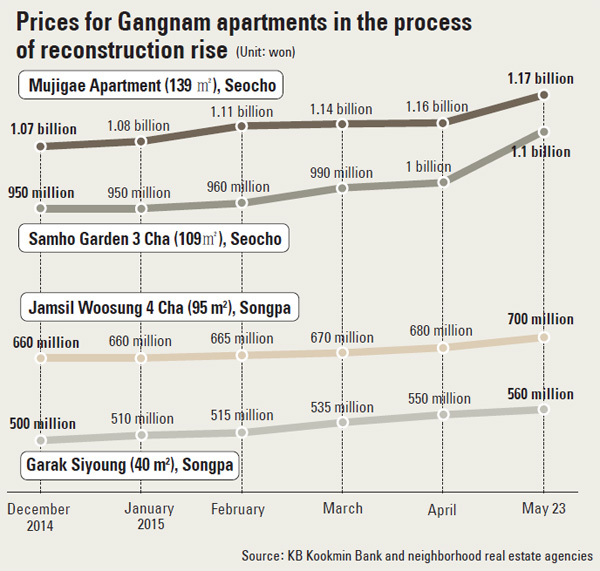 Organizers are currently planning the formation of a reconstruction union made up of current residents to be established by the end of this year and pushing forward with the construction process.

Gaepo Siyoung and Gapo Jugong 3 Danji apartments are also preparing to submit their reconstruction and redevelopment projects to the local government in Gangnam.

As the sales market for pre-construction apartments has heated up, so too have reconstruction and redevelopment projects, particularly in the southern area that includes Gangnam, Seocho and Songpa districts. The sentiment that the projects be pushed aggressively and swiftly when the market is good is also spreading among residents.

The redevelopment and reconstruction market boomed in the mid-2000s, particularly in Gangnam District. Gangnam’s real estate market also took off in the early and mid-2000s as the area transformed into the nation’s No. 1 spot for high-quality education.

Daechi-dong especially had the largest number of popular private institutions that guaranteed students would be admitted to prestigious schools.

Residents living north of the Han River and others nationwide also relocated to Gangnam, which added to driving up housing prices.

Reconstruction projects flourished as businesses looked to profit from the expanding market. However, noticing that the market bubble was getting out of hand, the Roh Moo-hyun administration stepped in, boosting regulations and tightening the reins on the loan-to-value ratio and the debt-to-income ratio on mortgages.

One of the most renowned regulations was the launch of a comprehensive real estate tax - the nation’s first - that increased the financial strain on homeowners with multiple high-value homes. Afterward, reconstruction and redevelopment projects started to cool down.

But not long after, the financial crisis hit on the heels of the subprime mortgage crisis in the United States. Those events hit the Korean real estate market hard, and some redevelopment and reconstruction projects, including the plans for low-story apartments in Gaepo-dong and the Eunma apartment complex in Daechi-dong, went into hibernation.

Home owners with aging apartments for years have been trying to push reconstruction projects, with little success, and many thought they had missed their opportunity.

Now, however, the situation is markedly different.

Since last year, the Park Geun-hye administration has eased various regulations that previously suffocated the real estate market, including those on loans. The central bank has cut rates three times since August to push the policy rate to an all-time low of 1.75 percent, which also contributed to the market recovery.

The news that the maximum ceiling on pre-construction apartment sales built on private land no longer applied to the reconstruction market helped increase the profitability of projects as well.

The reconstruction preparation union can now lower the financial burden on current residents by raising pre-construction sale prices on apartments to offset the cost to outside buyers.

“There are growing expectations over the reconstruction market in Gangnam with projects’ profitability expected to improve,” said Baek Joon, the CEO of J&K, a consulting firm specializing in redevelopment and reconstruction.

Those expectations have helped drive apartment prices up.

And experts forecast that the favorable sentiment in the redevelopment and reconstruction market will continue for quite sometime.

“The only means of supplying housing in the Gangnam area is reconstruction,” said Kim Dong-soo from the Korea Housing Association. “As such, sales on reconstructed housing units will continue for the mid to long term, with sufficient demand for it.”

When investing in reconstruction projects, experts warn that the investors have to see it as a long term project especially on those on the early stages as the project could often be postponed of its schedules as the interest among residents will be complicated.

Experts say in investing in such projects it is wise to choose those whose process is moving forward swiftly.

“The profitability of the projects will differ largely based on how conflicts among residents have been solved and the speed at which the project is moving forward,” said Park Hap-soo, head of the KB Kookmin Bank’s PB center in Myeongdong, central Seoul. “It would be most appropriate to approach the project as a practical purchase in buying a home rather than considering it an investment.”