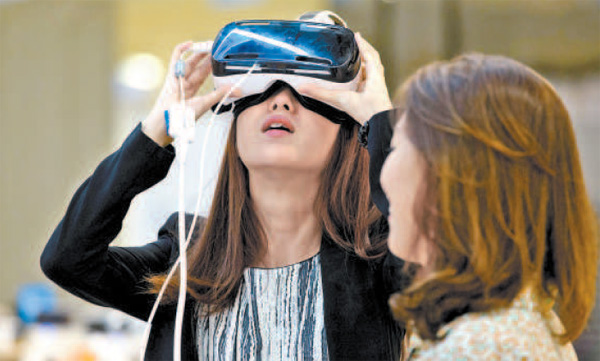 Virtual reality headsets and content will be “the next mega tech theme” and a market worth more than $60 billion in a decade, according to Piper Jaffray Cos.

“The diverse applications of VR in combination with accelerating technological improvements will lead to mainstream adoption over the next 10 years,” Piper Jaffray analysts including Gene Munster and Erinn Murphy wrote in a May report. “Our optimism around the theme is based on consumers’ insatiable appetite for new tech experiences.”

Virtual reality already has the vote of confidence from Facebook and Google, which together last year spent more than $2.5 billion on acquisitions in the space. Consumer electronics companies Sony, Samsung Electronics and HTC are developing headsets as content makers including game developers and even the National Basketball Association express interest.

In VR, a face-covering display takes over a user’s sense of sight, while sensors mimic the body’s subconscious mechanisms responsible for balance. The result is the actual feeling of being someplace when you’re not.

Facebook said it will ship a consumer version of its Oculus Rift by March next year, while Sony’s headset for PlayStation 4 console code-named Morpheus will debut by June.

Piper Jaffray forecast the all-in entry cost for the hardware to drop from about $800 to $300, with smartphone makers bundling low-cost headsets for free. In 2017, Apple will release an all-in-one device or a headset for iPhone 7, the report speculates.

Because keyboard and mouse input isn’t optimal for use with VR goggles, there will be a new market for peripheral devices that bring users’ hands and feet into virtual reality, according to Piper Jaffray.

Haptic devices that give physical feedback from interactions in virtual space will follow.

Gaming will be the first application, because of a user base that already owns PCs and consoles powerful enough to handle VR content, according to the report. Content will expand to include courtside seats at a basketball game, 360-degree movies and professional applications from hospitals to courtrooms.

“We liken the state of virtual and augmented reality today as similar to the state of mobile phones 15 years ago,” the analysts wrote. “Virtual reality will take time, but will profoundly change our lives.”