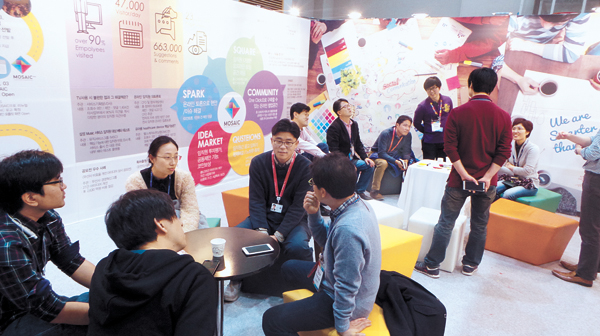 Samsung Electronics workers float their ideas at the C-Lab Fair last year where technology developed through the C-Lab program was displayed. The C-Lab system supports workers who want to translate their ideas into commercially viable items.Provided by the company

In order to detect the early symptoms of a stroke, patients currently need to head to a doctor for a brain CT scan and an MRI that could last for hours.

But with Samsung Electronics’ prototype solution, the Early Detection Sensor & Algorithm Package, people can test themselves at home in a far shorter time with a smartphone.

The platform, consisting of an app and brainwave sensors, is not the result of an official development procedure inside the company. Instead, it was created under the Creativity Lab or C-Lab program, which invites any Samsung Electronics worker to spend time translating their ideas into commercially viable products.

The program symbolizes the kind of corporate culture that Samsung Electronics wants to inject into the company. Instead of a rigid, formality-ridden setting, the company wants workers to express themselves freely and experiment with their ideas. 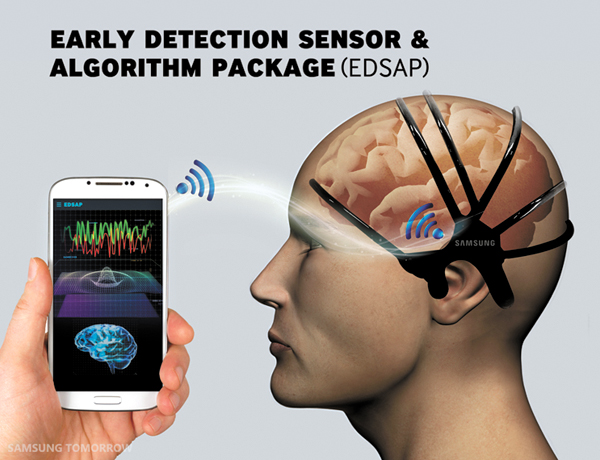 The Early Detection Sensor & Algorithm Package, a stroke-detection solution developed via the C-Lab program, can perceive the early onset of a stroke. Provided by the company

As Samsung Electronics is on its way to undergoing a transition of leadership from ailing Chairman Lee Kun-hee to his only son, Jay Y. Lee, the company is attempting to gradually shift its corporate culture to keep pace with the industry’s fast-changing landscape.

To become a true first mover, what matters now is a killer idea and the ability to apply it to product development, rather than relying on sophisticated programming and engineering skills. To help unleash the creativity of workers and push the boundaries of innovation, the company has embraced a more liberal working environment than before.

The C-Lab system is a part of the company’s efforts. Samsung Electronics has several physical sites across the region that employees can visit to create prototypes. The company selects the best ideas annually and the workers behind those can leave their positions for up to a year to devote time to developing the products further.

Introduced by a group of smartphone and washing machine engineers at the tech giant, the stroke detector was among the best ideas last year. The platform is under way to being commercialized in cooperation with Samsung Medical Center. It received positive feedback both in and outside of the company as it allows anyone with a smartphone or tablet to monitor their electrical impulses and detect the probability of a stroke. 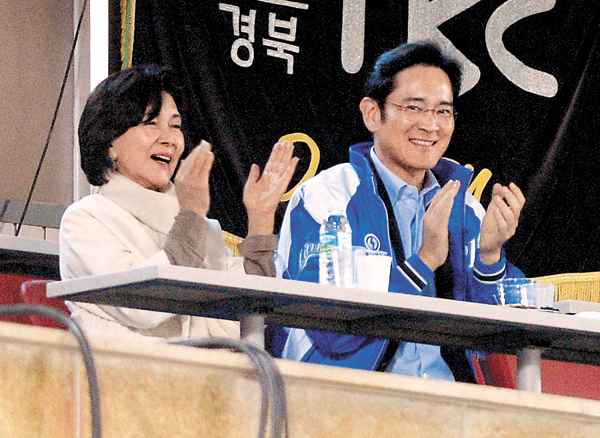 Jay Y. Lee, vice chairman of Samsung Electronics, watches a baseball game in which the Samsung Lions competes with the Doosan Bears at Jamsil Baseball Stadium on May 21. [NEWSIS]

The company has not officially revealed how precise the app is, but it says it has confidence that it could produce reliable results with more work.

A total of 3,000 workers pitched ideas under the C-Lab program over the course of last year.

“We learned through the program that a great idea can come when we give as much discretion as possible,” said Chae Soo-yeon, a corporate PR official at the company.

“We are encouraging more workers to engage in the program by hosting an event like the C-Lab fair where great technology from C-Lab are displayed.”

To garner ideas for C-Lab in a more systematic way, Samsung Electronics launched the company-wide collective intelligence system “MOSAIC” in 2014.

The online platform is designed to collect different suggestions from its employees around the globe and lets executives review these ideas through collective intelligence.

The platform is not all about product development. Workers can also use it to share inconveniences or complaints associated with working at the company.

Samsung said it tries to reflect the grievances and fix them through regular meetings.

The system consists of different sections, including “creative idea sharing,” where employees can propose their ideas.

In “Job Forum and Get Help,” workers can discuss difficulties that arise while conducting their jobs and receive help from company experts. The “Share Interests and Meet Your Peers” section, on the other hand, supports the online and offline meetings of employees with common interests.

If there is a feasible idea posted on the system, it will go through cumulative assessment from employees and then undergo the C-Lab system’s screening process.

Samsung rewards those who suggest good ideas with bonuses.

Also, workers are entitled to be entered for “Creativity” awards in a company prize-giving ceremony held at the end of every year.

In 2014, 63,000 workers across the globe posted their opinions on the platform. An average of 47,000 workers visit the internal system on a daily basis.

Among the ideas suggested on the platform, 50 received patent rights and 90 suggestions have been developed into commercialized products.

“Workers share their ideas freely because they can use the online channel,” the company said in a statement.

“One of the biggest advantages of Mosaic is that sometimes workers in other divisions can work towards generating a great idea,” it added.

“For example, 90 percent of suggestions related to camera products came from other divisions, not from the division in charge of cameras.”

Employees used to spend between 9 a.m. to 5 p.m. at the company, but they are now able to work four-hour days as long as they work 40 hours a week overall.

The system has applied to workers at all units besides production lines as of March. It is an expansion of the flexible hour policy that was introduced in 2012.

In the beginning phase, the company allowed employees to start work anytime between 6 a.m. and 1 p.m. and work at least four hours.

About 5,000 employees and executives at the Samsung Electronics semiconductor research institute in Hwaseong, Gyeonggi, and the digital media & communications unit in Suwon participated in the pilot program.

In October, the company expanded the system to its wireless, home appliance and TV units. An additional 45,000 employees at divisions related to design and R&D then became eligible for the program under the expansion, the company said.

“The new system that allows for more freedom and flexibility in choosing working hours is part of Samsung’s continued efforts to help each member work more efficiently and creatively,” said Chae.

“In lieu of putting workers in conventional working times, we thought it would be better to allow them to come when they think it’s the best time to enhance work efficiency.”

The Samsung Group plans to apply the new system to its affiliates and overseas offices. Samsung SDI and Samsung Display are reportedly mulling over whether to implement the system.

But it would be premature to say that the system will spread across Samsung Group to the construction and engineering sectors, which have work that involves cooperating with other departments and coworkers, as they would find it harder to adapt for their work hours.

Business: Manufacturing consumer and industrial electronic equipment as well as products such as semiconductors, personal computers, televisions and smartphones