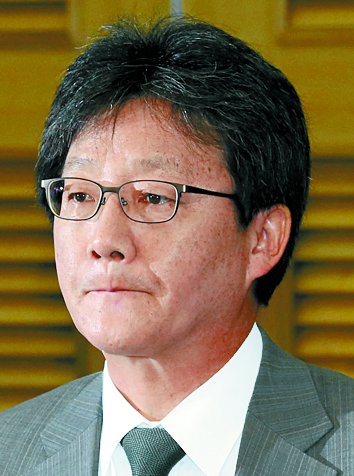 Lawmakers of the ruling Saenuri Party demanded Tuesday that Rep. Yoo Seong-min step down as floor leader after a compromise with the opposition last week has threatened a showdown between the Blue House and party leaders.

“Yoo has shown poor negotiating skills and political judgment and he is actually at the center of the conflict between the party and the Blue House and the government,” Rep. Lee Jang-woo of the Saenuri Party said. “Whenever he went to negotiate, he came back with irrelevant deals, and what the public has worried about has become reality.”

The demand for the scalp of the floor leader, who leads the Saenuri’s 160 lawmakers in the 298-member National Assembly, came in the aftermath of the National Assembly’s revision of the law governing the legislature.

Last Friday, lawmakers approved President Park Geun-hye’s ambitious project to overhaul the money-losing pension system for civil servants, but only after the ruling party accepted a demand from the opposition New Politics Alliance for Democracy (NPAD) to revise the National Assembly Act.

If the revision is signed into law, the legislature’s power will be boosted at the expense of the president and government. It can request the government to amend certain kinds of administrative legislation such as presidential decrees and the prime minister’s ordinances. After the National Assembly makes such a request, the government will have to comply.

The NPAD and the relatives of the Sewol victims want a civilian in charge of the investigation in order to ensure its objectivity and independence.

Last Friday, after hours of closed-door talks with his NPAD counterpart, Lee Jong-kul, Saenuri floor leader Yoo agreed to the revision of the National Assembly Act. Yoo and Lee also agreed that a special subcommittee will be created to change the Sewol ferry enforcement decree under that revision and vote on it at the National Assembly’s Agriculture, Food and Fisheries Committee in June.

Because the Saenuri Party has a majority on the committee and in the National Assembly, it may be able to block any changes to the decree.

The ruling party’s National Competitiveness Enhancement Forum, created by Park loyalists, discussed the controversial revision on Tuesday. Minister of Government Legislation Je Jeong-boo gave a presentation at the event and told the participants that the revision is unconstitutional.

After the session, some lawmakers told reporters that Yoo must step down as floor leader.

Rep. Kim Yong-nam complained that Yoo often misled lawmakers when he briefed them about the deals with the opposition. “Unless Yoo changes his manner of communication, Saenuri lawmakers cannot trust what he says,” he said.

“Although my heart hurts for saying this, I must say this to Yoo,” Rep. Kim Tae-ho, a senior leader of the Saenuri Party, said during a Supreme Council meeting. “After Yoo became the floor leader, conflict between the Blue House and the ruling party has deepened. We tried our best to help the floor leader perform his job well. We delegated all authority to him as the chief negotiator.

“When we delegated our power, he must have negotiated with the opposition based on the party’s various opinions and particularly the Blue House’s stance,” Kim said. “But the outcomes of negotiations always end up in conflict with the Blue House, such as the civil servants’ pension reform and the revision to the National Assembly Act.”

Rep. Lee Jung-hyun, a member of the Saenuri Supreme Council and a key ally of President Park, said the negotiation process should be examined and someone needs to take responsibility.

“The party leadership must tell the public how it will clear up this situation,” he said.

A senior presidential aide questioned Yoo’s willingness to cooperate with the Blue House.

“When the negotiations were taking place last month on the pension reform, the presidential office made clear that the National Assembly Act revision is not acceptable, but the party went ahead and approved it,” he said Tuesday. “In this circumstance, we came to wonder if there was any intention to coordinate state affairs with the party.”

Yoo remained tight-lipped on Tuesday about the demands for his resignation.

Saenuri Chairman Kim Moo-sung tried to protect the embattled floor leader. “Now is time to focus on resolving the controversy, not to indulge in a blame game,” he said.

Rep. Park Min-shik also defended Yoo by saying that it is unconscionable for the Saenuri lawmakers to blame the floor leader because they voted for the revision.

“The revision is now being used as a means for factional strife inside the party,” he said.