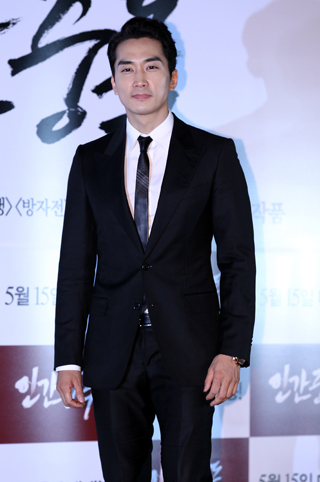 Actor Song Seung-heon has been confirmed to take part in Chinese blockbuster “Bombing” (working title), in which 100 billion won ($89,800,000) has already been invested.

“As soon as Song is prepared, he will go back and forth between Korea and China to participate in shooting the film,” according to the 38-year-old’s agency, Better Ent.

Song will act alongside Hollywood star Bruce Willis and Chinese actor Liu Ye, who will play the lead roles in the film.

“Bombing,” set to open next year, takes place during World War II. Song will play the role of a Korean fighter pilot sent from America to China.

In addition to the Chinese movie, Song’s new Korean comedy movie, “Miss Wife,” will be released in August, which he stars in with actress Um Jung-hwa.