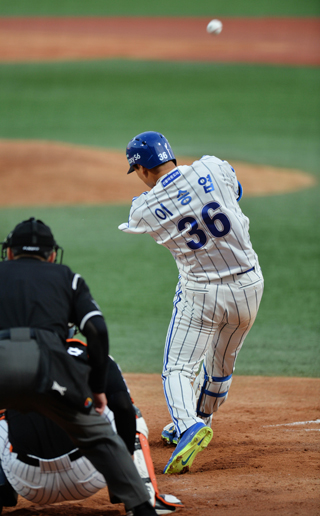 When Lee Seung-yuop swung in the bottom of the third inning against Lotte Giants pitcher Koo Seung-min on Wednesday, fans already knew history was being made.

“I thought I would feel numb, but something moved my heart,” said Lee, who has been the league’s all-time home run leader since 2013. “I really thought, ‘Now I’ve made it’.”

Lee’s accomplishment changed the game into a celebration. Lions manager Ryu Joong-il gave him a big hug in front of the dugout, and Lee’s father had tears in his eyes during the ceremony at the end of the inning. Giants captain Choi Joon-seok even gave Lee a congratulatory bouquet.

But Lee’s wife, Lee Song-jung, almost didn’t even make it to the game.

“I came to Pohang because our first son begged me, saying he was sure my husband would hit his home run today,” she said. “I’m really proud of him.”

Lee, who turned pro in 1995 by joining the Lions, is no stranger to breaking records. In 1997, he became youngest player to win the home run title, and would go on to claim it four more times. He became the world’s youngest player to notch 300 career home runs (at 26 years 10 months 4 days old), while also claiming the record for doing so in the fewest games (1,075).

After breaking the Asian single season home record of 56, the Daegu-born slugger moved to Japan’s Nippon Professional Baseball (NPB). Playing with teams like the Chiba Lotte Marines, Yomiuri Giants and Orix Buffaloes, Lee amassed 159 home runs in his eight seasons in the NPB. In the history of Major League Baseball, there are only 26 players who have more than 500 home runs. Considering Lee’s career total of 559 home runs, he would be No.14 in the MLB all-time home run rankings.

The five-time KBO MVP said that a home run is difficult to achieve, but that’s why they’re so thrilling. He added that he’ll now aim for 450 homers, which would put his career total over 600, and 2,000 hits in the KBO. As of Wednesday, the nine-time KBO Golden Glove winner had 1,764 hits in Korea. Including his days in Japan, Lee has 2,450.

The eight-time KBO All-Star said he might play a couple more seasons before he retires, but what’s certain is that he will always work hard. The JoongAng Ilbo, an affiliate of the Korea JoongAng Daily, sat down with Lee earlier this week to talk about his home runs and what’s next. 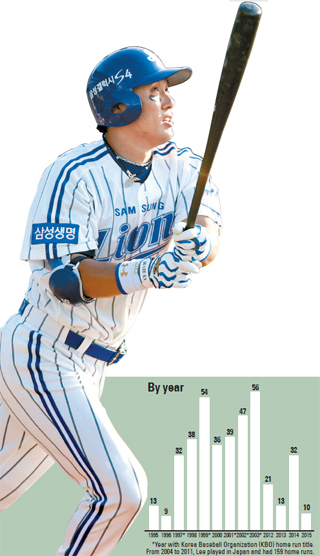 Q. You had 390 home runs till last year, but adding 10 more this season didn’t seem to be easy for you.

A. It was easy up to the seventh home run, but it became difficult after that. I couldn’t swing like I wanted - it was like I’d been badly hypnotized. It just became a downward spiral. Before I face off with a pitcher I have to be strong inside, but I just didn’t feel it.

Is baseball difficult for you, despite your skills?

Because of my experience, I managed to maintain a batting average near .300. But I was worried that my responsiveness on the pitch was getting slower as I got older. My condition was really bad in early May, but I’m getting better. It’s like I’m seeing light at the end of the tunnel.

You need 41 more home runs to hit 600, including your homers in Japan.

It’s possible, but I know it won’t be easy. Since I made my professional debut in 1995, I always felt pressure to perform well. But from now on, I want to think about home runs as bonuses.

Your single season 56 home runs and 400 home runs in the KBO looks unbreakable.

No, I think Park Byung-ho [of the Nexen Heroes] can break it. His potential bloomed a little late, but I think he can deliver 30 home runs per season over the next 10 years. If he doesn’t get injured or go overseas, it’s possible. For the single season home run record, I think not only Park, but other players can break it as well.

But don’t you feel little sad when your records are broken?

Records are meant to be broken. Since I played eight years in Japan, I think it’s right that young players beat my records. I surpassed 500 home runs in my career including my days in Japan. I’m already satisfied with that.

What home run remains most in your memory?

In Gwangju, I got my first professional home run by hitting a curve from Haitai Tigers’ pitcher Lee Kang-cheol. As a Lions hitter had just gotten a home run, Tigers fans fell silent. I remember putting my head down and running the bases quickly.

Do you think your transformation from pitcher to hitter changed your life?

After I joined the Lions, I was resting up following surgery on my left elbow. Then Lions manager Woo Yong-deuk and coach Park Seung-ho asked me to bat for just one month. At first I wasn’t very confident. I worked hard and batted .285 with home runs in my rookie year, but I still wanted to pitch. The team persuaded me to bat for another year. In 1996, I had .303 batting average and the following year I was the home run king and MVP. By then, even if the team ordered me to play as a pitcher, I wouldn’t have done it (laughs).

You then earned the nickname “People’s Hitter.”

Back then, getting a home run wasn’t easy. With the media’s attention and support from the fans … there was a lot of pressure. But looking back, I just thank them for giving me so much love.

Things weren’t always easy for you in Japan. When you were in the minors, you’ve said you were shocked when your son asked why you weren’t on TV anymore. But your sons must be happy these days.

Do they want to be baseball players like you?

I want to stop my sons from playing. How should I feel when I’ve heard someone saying to my son, “Your father is good at baseball, but why aren’t you?” But I don’t force them to study hard, either. I just want them to be happy doing what they want to do. But my first son recently entered a little league team in Daegu. If he becomes a player, I’ll welcome it because baseball teaches you a lot.