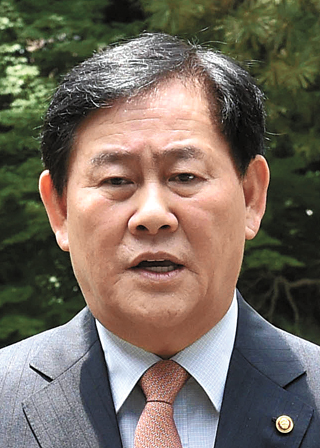 Finance Minister Choi Kyung-hwan called upon developed nations to “normalize” their monetary easing policies, as their rate cuts could have a negative impact on export-driven emerging markets like Korea.

At the Organization for Economic Cooperation and Development (OECD) Council’s annual meeting, where leaders of the 34 member countries gather to discuss global issues at the organization’s headquarters in Paris on Wednesday, Choi expressed worries about the simultaneous monetary easing policies adopted by developed nations to boost their economies.

“Several major economies are carrying out unprecedented rate cuts to recover from their economic crises, such as the United States, Japan and the European Union, bringing their base rates close to zero,” Choi said. “There is speculation that their monetary easing increases uncertainty in the global finance market and could negatively impact emerging countries.

“It is the world economy’s biggest task to normalize [these policies] without causing side effects,” he added.

Choi warned that if the developed nations do not cooperate in raising their rates, a global economic crisis could result.

“While the world’s economic growth is tepid, if emerging countries’ economies are shocked by developed countries’ currency policies, it would lead to further shrinking of the world economy,” he said. “The world economy would fall into more serious chaos and suffer from a bigger crisis than that of the 2008 financial crisis.”

His warning came after Korea’s exports continued to fall over the past months, particularly in shipbuilding, home appliances and automobiles.

Despite the decline in exports, imports dropped at a faster rate, leading to the longest-ever current account surplus streak, 38 straight months as of May.

The state-run think tank Korea Development Institute also said in its monthly report on Thursday that sluggish exports are leading to a slowdown in overall economic growth.

“The slump in exports is deepening as world economic growth is tepid and [Korean products’] price competitiveness is being eroded [by weak foreign currencies],” the report said.

“Accordingly, output in the manufacturing sector also continues to decline.”

In the midst of the gloomy data on the Korean economy, some analysts say the ongoing outbreak of Middle East respiratory syndrome (MERS), the potentially fatal respiratory virus, could put pressure on the Bank of Korea to cut rates further.