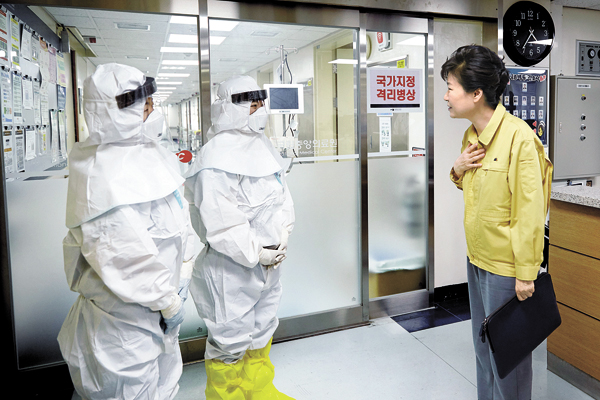 President Park Geun-hye visits the National Medical Center in Jung District, central Seoul, on Friday, to see first-hand the countermeasures against MERS. The state-run hospital runs a special ward for patients with contagious diseases. Provided by the Blue House

The government and Bank of Korea are mulling measures to minimize the repercussions of the potentially deadly Middle East respiratory syndrome (MERS) outbreak on the Korean economy.

At a seminar on the Korean economy in London Thursday, Acting Prime Minister and Finance Minister Choi Kyung-hwan told reporters, “Currently, the government issued a warning at the ‘be cautious’ level. We already ordered [authorities] to take measures to a higher level.”

Attention is on an upcoming monetary policy meeting of the central bank, presided over by BOK Gov. Lee Ju-yeol, and whether he will announce a further rate cut to boost a domestic market battered by fear of the infectious virus.

Lee said at a meeting with economists in Seoul on May 26 that he will strive for policy backed by the most recent data.

“After checking newly updated figures are matched with economic outlooks, I will judge [whether to cut rates or not],” he said at the time.

But that was before the outbreak of MERS led to Koreans staying inside and avoiding shopping and entertainment, which is sure to depress the economy.

The Korean government has faced several deadly viral episodes in the past. In 2003, when the severe acute respiratory syndrome (SARS) epidemic hit Hong Kong and spread to other Asian countries, the Korean economy was already struggling with various domestic and international problems such as the Iraq War, North Korea’s withdrawal from the treaty on non-proliferation of nuclear weapons, and the domestic credit card crisis.

At the time, both the government and the Bank of Korea took bold measures against external factors threatening the domestic economy, including the SARS outbreak. Just a month after the first case was confirmed in April 2003, the government announced its decision on a revised supplementary budget of more than 4 trillion won ($3.5 billion).

The Bank of Korea also cut its key policy rate twice, in May and July 2003, by 0.25 percent point each time.

The situation was a bit different when Korea was hit by swine flu, or the H1NI influenza virus, in 2009.

There were numerous confirmed cases in Korea, but the Korean economy at the time was showing positive signs, unlike the sluggish domestic market seen now.

“When the H1NI flu virus hit the country in 2009, the world economy was rebounding and Korea’s exports were rapidly growing and the stock market was good,” said Kim Jin-myeong, an analyst at the HI Investment and Securities.

Despite the high inflation, the BOK froze the base rate. The government also focused on supporting medical assistance.

Analysts say it is still uncertain whether the MERS outbreak will clobber the Korean economy as hard as the sinking of the ferry Sewol last year, which dragged down overall domestic consumption and is still being felt.