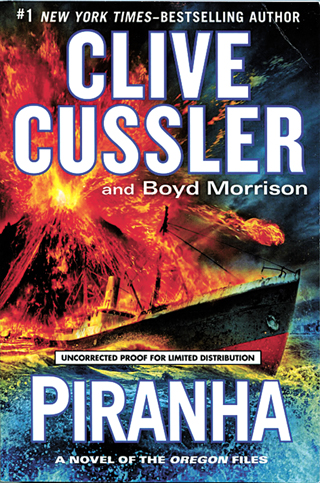 “Piranha,’’ the latest in the Oregon Files series of novels by Clive Cussler, has a new co-author, Boyd Morrison, and proves to be the best entry in the series to date.

Juan Cabrillo and his team are experts in covert missions, and their ship, the Oregon, has been their base of operations since they started. It has state-of-the-art technology and weaponry, but can be disguised as a rusty wreck that can barely stay afloat. Deception has been key in all their missions, and Cabrillo runs his operations with his trustworthy crew in a style similar to the “Mission: Impossible’’ TV series and films.

The latest mission sends Cabrillo and his team to Venezuela, where one of their adversaries uncovers the deception and realizes the ship is the Oregon. To escape, they fake the sinking of the ship, but it is just the beginning of their problems. Their adversary has access to weaponry and drones that he has personally hacked, and no one is safe. He seems to anticipate every move conceived by Cabrillo and the crew of the Oregon. With their lives and ship in peril, can Cabrillo save the world again?

Oregon Files novels typically have outlandish villains mixed with elaborate con jobs designed by the heroes for infiltration purposes. Cabrillo always seems one step ahead of the notorious fiend and his dastardly plot. It is not the case this time. Cabrillo has to scramble to survive, and he and his crew will be tested in ways they never imagined.

An extra element that makes this entry in the series a winner is the hodgepodge of cameos and the use of characters from other Cussler novels. There is even an appearance from Tyler Locke, the hero of Morrison’s solo adventures. “Piranha’’ is a perfect beach read.