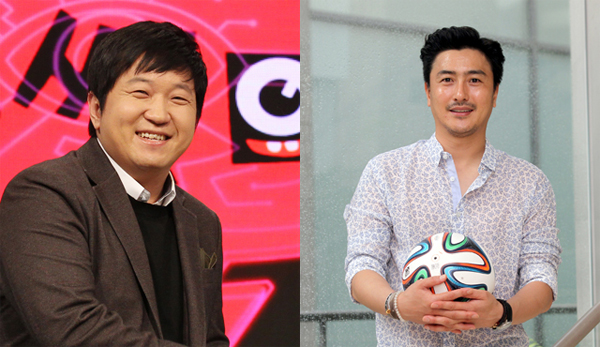 The upcoming program, expected to air its first episode in July, will explore celebrities’ closets and involve discussions about clothing.

The two hosts will prepare for the program alongside a few of the program’s guests, including Sung Si-kyung, Moon Hee-jun and Ok Taecyeon.

Jeong and Ahn worked well together on the variety program “Our Neighborhood Arts and Physical Education.” Jeong, 37, debuted as a comedian on the popular “KBS Gag Concert” in 2002. After getting recognition from his work on the show, he has hosted various reality panels, the most famous of which is MBC’s flagship program “Infinite Challenge” (2006-present). He is one of the founding members of the program.

Ahn, 39, found himself in the spotlight after scoring the winning goal during the match against Italy in the 2002 FIFA World Cup. He also took part in the next two World Cups, held in 2006 and 2010.

He is greatly renowned for not only his soccer skills, but also his good looks.

The former football player started his entertainment career in 2013 with various reality programs like SBS’s “The Law of the Jungle in Himalaya” (2013). He enjoyed popularity once again after appearing on season two of MBC’s “Dad Where Are You Going?” (2014-15).