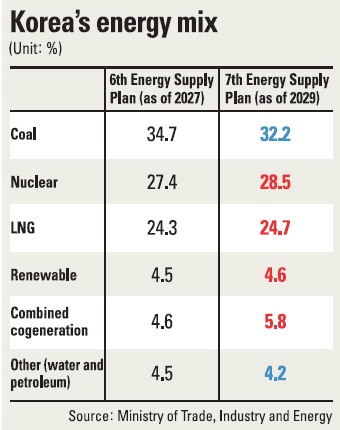 The government said it plans to build two additional nuclear reactors with total capacity of 3,000 megawatts by 2028 and 2029, part of efforts to increase nuclear and renewable energy generation over the long term while minimizing reliance on coal.

The country now has 23 reactors in operation and 13 planned for construction including the two announced. A location has not been determined for the new reactors; however, it will be decided by 2018 whether they will be based in Samcheok, Gangwon, or Yeongdeok County, North Gyeongsang.

The government said it will funnel nearly 7 trillion won ($6.2 billion) into construction for the new units.

According to industry insiders, it’s more likely that the reactors will open in Yeongdeok, where the public is more welcoming toward nuclear power than in Samcheok, which has maintained a stern stance against nuclear power since the meltdown at Japan’s Fukushima Daiichi Nuclear Power Plant in 2011.

Yeongdeok is also where two other reactors have already been scheduled for completion in 2026 and 2027.

The new units are part of the Korean government’s long-term energy supply plan, which is reset every two years and covers a 15-year period. The plan takes into account estimated energy supply and demand estimates, considering changes in Korea’s gross domestic product (GDP) and power generation among energy sources.

On Monday, the Ministry of Trade, Industry and Energy submitted its national energy supply plan for the 2015-2029 period to the National Assembly for review. The final decision will be made by the end of this month, following a public hearing about the feasibility of the plan.

The 15-year plan’s main emphasis is on reducing carbon emissions in order to meet the global carbon reduction goals set by the United Nations, which require Korea to reduce its reliance on coal for thermal power and increase carbon-free energy sources.

“We figured that the new energy supply and the demand forecast requires us to have an additional 3,000 megawatts of energy capacity, and we decided to fill the gap with two 1,500-megawatt nuclear reactors,” said Chung Yang-ho, the deputy minister of the Office of Energy and Resources at the Energy Ministry.

At the end of last year, Korea had the capacity to generate 93,216 megawatts of energy.

In its seventh energy supply plan, the ministry forecast a maximum supply capacity of 111,929 megawatts by 2029, with supply increasing by 2.2 percent annually. Korea’s maximum energy demand was subsequently estimated to reach 656,883 gigawatt-hours in 2029, increasing an average of 2.2 percent annually for the next 15 years.

Estimates concerning the rise in demand were less than in the sixth energy supply plan (2013-2027), which at the time was 2.5 percent, due to the slowdown in Korea’s GDP.

The long-term energy supply plan, however, has sparked controversy over whether the government has overblown estimates regarding future energy demand, resulting in plans for additional nuclear reactors: Some critics claim the ministry’s decision of setting the minimum power reserve at 22 percent is inflated, while its demand forecast is too high.

“The forecast for energy demand has been overblown,” Green Korea, a civic group, said in a statement Monday, adding that average annual growth for energy sales have steadily slowed since 2010, falling below 0.6 percent year-on-year in 2014.

However, Chae Hee-bong, who heads the ministry’s energy policy division, countered that it was dangerous for the government to make the forecast too small, citing blackouts in 2011.

“This time, we tightened our belts when it came to the demand forecast.”