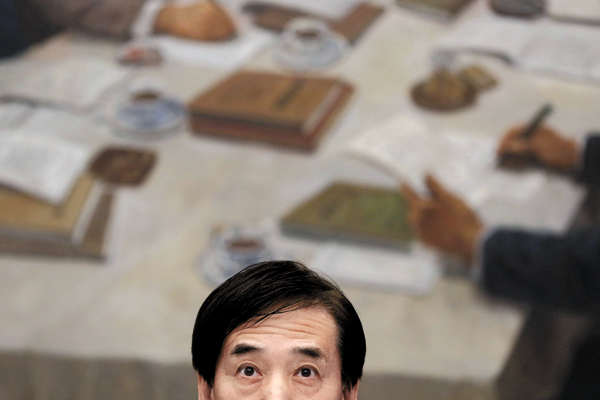 The ever-growing debt comes at a time when the nation’s central bank faces a dilemma over whether it should make another cut in its already record-low benchmark interest rate. The nation’s economy faces two new challenges: falling exports and eroding consumer sentiment caused by the outbreak of Middle East respiratory syndrome (MERS).

Even market experts are split on the issue.

The Bank of Korea said new loans at banks and nonbanking financial institutions, including savings banks and insurance companies, in April were 10.1 trillion won ($9 billion) more than in March.

As of April, Korea’s household debt stood at 765.2 trillion won.

The previous monthly record was in October, when 7.8 trillion won in new loans were taken out after the BOK rate cut in August and government easing of the loan-to-value and debt-to-income ratios for mortgages.

April’s new loans were double the 4.9 trillion won taken out in March.

Most of the new loans in April were mortgages. With 8 trillion won in mortgages from financial institutions, the nation’s total mortgage debt stands at 477.8 trillion won.

The surge in mortgages is seen as being driven mainly by the central bank’s rate cuts to a record low of 1.75 percent. The central bank cut its policy rate in August and October last year, and again in March.

The intention was to boost the domestic market by encouraging consumers to spend in the aftermath of the Sewol ferry disaster in April.

“It is the first time the country recorded a monthly increase of more than 10 trillion won in household debt since the government started to collect data in its current form in 2003,” said Shin Byeong-gon, a BOK official, at a briefing Tuesday. “Since the second half of last year, mortgages have steadily expanded under the low-rate policy, and seasonal factors also contributed to the increase in April.”

Spring is traditionally a time when many Koreans move.

The capital showed no increase in household debt a year earlier, but it jumped 3.4 trillion won in April.

Under Finance Minister Choi Kyung-hwan’s easing of regulations in real estate market and the central bank’s repeated rate cuts, household debt has jumped from 710.9 trillion won in July 2014 to 765.2 trillion won in April.

While speculation is divided over whether the BOK will further cut its benchmark rate from 1.75 percent, central bank Gov. Lee Ju-yeol said Monday at the bank’s international conference that an increase in the U.S. Fed’s benchmark interest rate would cause a “taper tantrum” in the Korean economy. He warned of a massive exodus of foreign capital to the United States and a skyrocketing interest rates for all types of loans.

Still, the latest gloomy data on domestic consumption also increases speculation that Lee will feel pressure to cut the rate.

At a meeting of finance ministers of Asean +3 countries in Baku, Azerbaijan, in May, Choi said a U.S. rate hike would not lead to a massive exit of foreign capital from Korea.

In April, Choi publicly asked, “Should we indeed raise our rate if the U.S. Fed increases its interest rate?” He added, “When the economy is slow, there should be a change in monetary policy.”

However, the BOK chief refuted that position in April, saying, “It is not right to excessively depend on monetary policy to respond to the low growth. There are few countries that cut the base rate three times.”

At the Monday meeting, Lee mentioned the role of “both monetary policy and budget management” in dealing with low economic growth and inflation, apparently pushing the Finance Ministry to allocate a supplementary budget rather than pressure the central bank for another cut in the rate.

So far, Choi and Finance Ministry officials have been cautious about mentioning a supplementary budget due to a persistent deficit. The budget deficit in the first quarter was 26 trillion won, an increase of more than 1 trillion won year-on-year.

Standard Chartered recently joined other institutions, including BNP Paribas, in betting the central bank would likely seek a rate cut.

“BOK Governor Lee has repeatedly expressed concern about the tightening interest rate spread. Potential capital outflows and rising domestic household debt have been key factors preventing further rate cuts in Korea, but we believe these are less relevant now,” said David Mann, Standard Chartered chief economist. “The BOK has room to ease further based on recent economic data deterioration, which calls for a boost to the economy, and the continued monetary easing trend globally.”

The Standard Chartered analyst projected a 0.25 percentage point cut, which would push the policy rate down to another record low of 1.5 percent.

“The window of opportunity will shrink once the U.S. rate hike cycle begins and increases the risk of capital outflow from Korea,” Mann added.

Other experts believe the central bank is likely to let the rate stand. If so, it would the third consecutive month the benchmark rate has been 1.75 percent.

According to a survey by the Korea Financial Investment Association released Tuesday, 70 percent of 117 bond experts said the central bank will likely keep the policy rate at its current level.

The experts projected the central bank might take a more cautious stance to monitor the market’s reaction to growing expectations of a interest rate increase by the U.S. Federal Reserve in September.