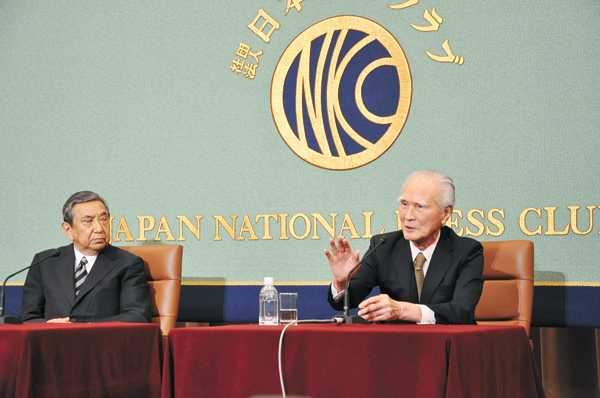 Japan’s former Chief Cabinet Secretary Yohei Kono said the Japanese imperial army did force young women in former colonies into becoming sexual slaves for soldiers during World War II, reiterating his long-held position that the women fell into the system “against their will.”

During a packed joint press conference with former Prime Minister Tomiichi Murayama on Japan’s past wartime aggressions Tuesday at the Japan National Press Club in Tokyo, the former top politician said the sexual slavery, euphemistically called the comfort women system, was orchestrated by the “Japanese military.”

Kono’s blunt remarks on the comfort women come as the 70th anniversary of the end of World War II on Aug. 15 approaches and Prime Minister Shinzo Abe will address the issue in a much-anticipated speech. Former colonies like Korea are worried he will dodge the historical truth and Japan’s culpability.

“Some may have been tricked and deceived to fall victim [to sexual slavery]. And there could have been cases of human trafficking as Prime Minister Abe suggested,” said Kono. “After all, these women were taken into [sexual slavery] against their will.”

Stressing the importance of acknowledging that the comfort women system was run by the Japanese imperial army, he added, “It is common sense to say that this system was wholly operated by the army.” He went on to say the victims were transferred to one place from another via military vehicles.

Kono is widely known in Korea for his straightforward acceptance of the fact that Japan is responsible for the comfort women system in a statement of contrition made in 1993, which is now known as the Kono Statement.

The 1993 statement clearly expressed remorse for Japan’s past wrongdoing, saying the Tokyo government “would like to take this opportunity once again to extend its sincere apologies and remorse to all those, irrespective of place of origin, who suffered immeasurable pain and incurable physical and psychological wounds as comfort women.”

Kono made clear the Japanese imperial army was responsible for “the establishment and management of the comfort stations and the transfer of comfort women.” It was Japan’s first official acknowledgement and apology for its operation of the comfort women system.

Murayama, who was prime minister on the 50th anniversary of the end of World War II in 1995, delivered an equally heartfelt apology for Japan’s invasion of neighboring countries. It is now known as the Murayama Statement.

On Abe’s upcoming speech, the 91-year-old former prime minister said it was “important for Abe to clearly cite the Murayama Statement” in expressing his apology and remorse so that he could “solve misunderstanding in the international community.”

In the statement 20 years ago, Murayama said Japan advanced to war under “a mistaken national policy” and “through its colonial rule and aggression, caused tremendous damage and suffering to the people of many countries, particularly to those of Asian nations.”

Calls for Abe to clearly acknowledge Japan’s responsibility for the comfort women system have only risen as he continues to evade it, using the term “human trafficking” and avoiding the term “sexual slavery.” The Korean government expressed “regret” last month that he has failed to properly acknowledge Japan’s responsibility for its wartime aggressions.

The joint forum in Tokyo Tuesday came a day after a group of 281 Japanese professors and scholars issued a statement urging Abe to face up to history without distortion, especially on the issue of comfort women, and demanding his government squarely accept the responsibility born by the then-imperial army.