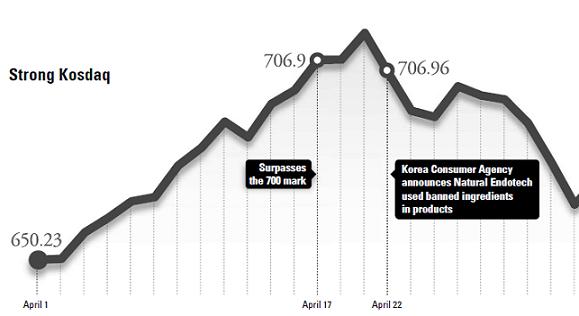 There is an old Korean saying that no younger brother can ever do better than his older brother. But in the case of the Korean stock markets lately, that has not been true.

The main Kospi has risen 6.8 percent so far this year. During the same period, the Kosdaq surged 29.5 percent.

But recently, the two have been heading in different directions.

The Kospi has been slipping since hitting its year-high in April. The tech-heavy Kosdaq, on the other hand, just keeps climbing.

The Kosdaq hit a year-high on Monday when it closed at 716.43. The following day, it broke the record again by finishing at 722.51 - its highest level in seven years and six months. The tech-heavy secondary market backed down on Friday, but remains higher than Monday.

The strong momentum has also contributed to changes in the fund market. Domestic equity funds have seen an outflow of 7.78 trillion won ($6.98 billion) from the beginning of the year. But among the funds, those investing in small and midsize caps have actually attracted over 175.5 trillion won.

So why is the Kosdaq riding high, and is it a good time to invest in the secondary market? The JoongAng Ilbo sought advice from the heads of six research centers at major securities firms.

Ahn Byung-kook, head of the KDB Daewoo Securities research center, says one of the biggest factors in the Kosdaq’s growth is a change in the way investors are purchasing stocks.

In the past, inexpensive stocks were widely popular. Today’s investors, however, are focused on stocks that could actually fall in value. The buyers are betting that a fall in prices will attract other investors, who will push the stock above the price they originally paid.

Ahn says the Kosdaq’s major players - retail investors - have not changed. But their style of investment has shifted. He compares their strategy to that of a venture capitalist, who makes long-term bets by investing in a company’s future value.

These investors focus on industries more flexible with the structural changes of the market, rather than shares sensitive to changes in the economy.

Investors have typically relied on short-term strategies that are focused on changes to global market trends.

“Recently on the Kosdaq, industries that have a continuous increase in demand regardless of market trends have become popular,” said Ahn.

Companies in the pharmaceutical or bio industries have been popular, as they are expected to see steady demand from the nation’s growing elderly population. Cosmetics and tourism companies have also done well, as the Chinese consumer market continues to grow.

The Kosdaq’s bullish run has also been aided by huge investments from institutional investors.

“When looking at the net selling and buying on the Kosdaq market earlier this year, it is clear that retail investors were buying while foreign investors were selling,” said Lee Jun-jae, head of the Korea Investment and Securities research center. “But unlike the past, institutional investors have net purchased 94.4 billion won worth of stocks [on the junior market].”

He said that insurers and pension fund investors, who have a tendency to be long-term investors, have each bought 200 billion won worth of stocks.

The trend can also be seen in fund investments.

Mertiz Korea Fund, whose investment currently stands at 329.5 billion won, has been the most popular. The fund is not focused on investing in small and midsize companies, but 32 percent of its investments are allocated to the Kosdaq - a clear sign that institutional investors’ strategy has changed this year.

But the main factor contributing to changes in the Kosdaq market is the primary Kospi.

“As the Kospi has been underperforming, investors have turned their interest to the Kosdaq market,” said Shin Dong-seok, head of the Samsung Securities research center.

The stocks of major companies that usually make huge profits from exports, like Samsung Electronics and Hyundai Motor, have been struggling this year due to increased competition by rival Japanese companies, whose products are cheaper due to the weak yen. The possibility of a rate hike from the U.S. central bank, which many market experts predict will happen in September, has also added pressure.

“The skepticism over the global market’s recovery and the risks attributed by the won exchange has led to the rise of Kosdaq,” said Ahn of KDB Daewoo Securities.

However, a restaurant will not thrive just because its competitor serves bad food - it has to offer something that actually appeals to its customers. This has been the case with the Kosdaq so far.

What is the Kosdaq’s current appeal? Unlike the Kospi, where most listed stocks are major manufacturers sensitive to the economy, the Kosdaq mostly consists of small and midsize companies less affected by the changes and still expected to maintain huge demand.

“[Under the current] structure, it is inevitable that companies specializing in bio and content development, as well as consumer goods, will have better performances than traditional manufacturers with huge businesses,” said Cho Yong-jun, the head of Hana Daetoo Securities’ research center.

Low economic growth is another contributor to the Kosdaq’s run.

Lee added that as investors struggle to profit from bank deposits due to the low rate, and as the Kospi underperforms, investors are drawn to the junior market, which is riskier but potentially more profitable.

But that does not mean every investor is profiting from the rising Kosdaq market.

In fact, some have suffered huge losses like in the case of Natural Endotech.

The company’s stock - once as high as 91,200 per share earlier this year - plummeted to 8,500 won after the Korea Consumer Agency announced April 22 that the company used banned ingredients in its products.

The stock continuously fell to the daily limit and dragged the Kosdaq down with it. In just two weeks, it hit this year’s low of 665.94, on May 6.

The market has since recovered its momentum.

While most of the experts agree that the Kosdaq will continue to show strong growth, some held a more conservative view.

“We shouldn’t see the Kosdaq’s strong growth separately from the Kospi [movement],” said Yang Ki-in, head of research at Shinhan Investment Corporation. He said this is because several companies listed on the Kosdaq are actually suppliers to a single company listed on the Kospi.

“In fact stocks listed on the Kospi that were related to pharmaceuticals, bio and cosmetics, and showed strong growth actually helped raise the Kosdaq market,” Yang of Shinhan Investment added.

The research head cautioned over heavily investing in Kosdaq due to the lack of information on companies listed on the junior market. He added that the information available is sometimes incorrect.

“The actual performance of a company and the brokerage firm’s projection shows a difference of 98 percent on companies listed on the Kospi and 198 percent on the Kosdaq,” said Yang. “There’s not much information [on Kosdaq companies] for even experts to make an accurate projection.”

“There are numerous companies where it is difficult for ordinary investors to understand unless you’re an expert such as bio companies,” said Shin.

The experts also agreed that the Kosdaq could fall as quickly as it rose.

“There’s a huge possibility that an adjustment could be made as it attracted huge investments not based on the companies’ performances,” said Yang of Shinhan Investment.

“It is crucial to make careful investments, since some stocks have reached a level where they’re valued higher than they’re actually worth,” said Lee of Korea Investment.