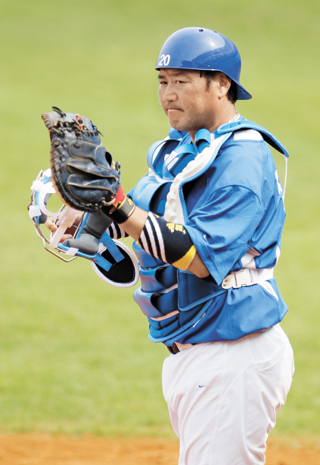 In baseball, some people argue that catcher is the most difficult position to play. Armored with a mask and protective gear, catchers must sit down and stand up repeatedly throughout the game, which causes a strain on the body. They are widely regarded to have comparatively short careers as a result.

Samsung Lions’ Jin Kab-yong, however, has endured the strain of the position longer than anyone else in the Korea Baseball Organization (KBO).

Born on May 8, 1974, Jin became the oldest catcher to play in the league after taking part in a game against the Hanwha Eagles on April 15, breaking the previous record held by Park Kyung-oan (40 years, 10 months and 19 days).

On May 10, he became the oldest Korean player to hit a home run, defeating Lee Jong-beom’s record. Now, whenever Jin plays or hits home runs, history is written in the KBO.

After graduating from Korea University, Jin went pro after signing with the OB Bears (now Doosan Bears) in 1997 before getting traded to the Lions in 1999. He is one of Korea’s best catchers, having represented the nation in two Summer Olympics (1996, 2008) and two World Baseball Classics (2006, 2013).

Last year, however, marred by injuries, Jin only played 11 games in the KBO League. The 2008 Olympic gold medalist said he will continue playing as long as his body remains healthy, while passing over his know-how to young teammates.

Jin, whose father was also a baseball player until high school, said that his son is also playing baseball and wishes for him to become a player with a long career like him.

Q. Why did you start your career as a catcher?

A. Maybe I caught a ball well (laughs). At first I played in both the infield and outfield. When a senior member of the team played catcher, I played third baseman. In the 1996 Atlanta Olympics, I was an outfielder.

What makes you want to play catcher?

I feel great when the starting pitcher’s goal is achieved. For example, if the pitcher says he wants to have a shutout or give away less than two runs and the goal is achieved, it gives you the best feeling - better than getting home runs or hits. When the pitcher makes a good pitch and you collect a home run or a walk-off hit, it just feels good. But if you lose the game, it’s useless.

Top-class catchers like Kim Dong-soo and Park Kyung-oan were good at both offense and defense. How about you?

In the past, if you couldn’t bat well you couldn’t even play the game. The Golden Glove award was given to the player who had a good offensive record. But these days, I think that trend has started to change a little.

How do you feel about setting a new record by being the oldest catcher to play and get a home run?

I don’t feel special. I’m a player who needs to support the pitcher, not support the offense. Because of the team’s situation, I go out and play as a pinch hitter, but my main role is defense. I think I don’t contribute much to the team, but I believe it will get better.

Manager Ryu Joong-il lamented that your throw to second base is not like it was in the old days.

My elbow doesn’t feel good since I had surgery on it. Since there’s pain, I can’t deliver enough power and that’s why I have a difficult time throwing. I think old players quit because they get hurt. But I’ve never thought about not playing baseball, because it’s fun.

One analyst said your batting speed is still the same.

In the end, it’s about timing. If my batting speed is slow, I put the contact point in front and make adjustments.

In the spring camp, you said you don’t want to get hurt. Do you think that now because you’re older?

Of course. Now, my whole body is aching (laughs). In early April when I started two games in a row, I felt a little tired and thought that being a catcher is really difficult. But I think players in other positions also have difficulties.

For more than a decade, you were the starting catcher for the Lions, but recently you haven’t been playing so regularly. How do you feel about that?

Even if they asked to me play I couldn’t (laughs). Young players are doing fine. By just looking at the defensive side, both Lee Ji-young and Lee Heung-ryun are doing well. For leading pitchers, they often do what they’re told since they don’t have experience, but it will be better as they gain more experience. Regardless of whether I play in the game or not, I’m satisfied that I’m still in the roster for the starting lineup. Even my friends look at me with a smile on their faces. Last year, I couldn’t play many games because of the surgery, but when they see me, they say ‘It’s great that you play these days despite taking a rest last year.’ They sometimes joke with me, saying, ‘what’s your age again?’ (laughs).

Do you have any career regrets?

You came to the Lions through a trade. What does the team mean to you right now?

Playing with the Lions restarted my career. It’s the team that revived me. At first I felt good when I heard about the trade. If I didn’t play for the Lions, I would have already retired. When I first came to the Lions, they were the team with a big desire for a championship. Since they always fell in the post-season, the team had pressure on it, which I also felt for a while. But eventually, I experienced a best-of-seven championship title with the team.

When will you retire, and what’s your plan afterwards?

First, I have to discuss with my team when I will retire. If I just abruptly said I would retire, my team wouldn’t like it. I would also hate it if the team proposed that I retire without telling me first.

Still, I think the manager needs me to fulfill some jobs such as in defense, as a back-up catcher and as a pinch hitter, and that’s why I have to play games. If I feel that I just can’t do it because I’m old, then I should quit.

The Lions will play in a new stadium next year.

It will be best for us to win the championship next year. I joked to the team’s officials that they should keep my locker for just one more year (laughs).