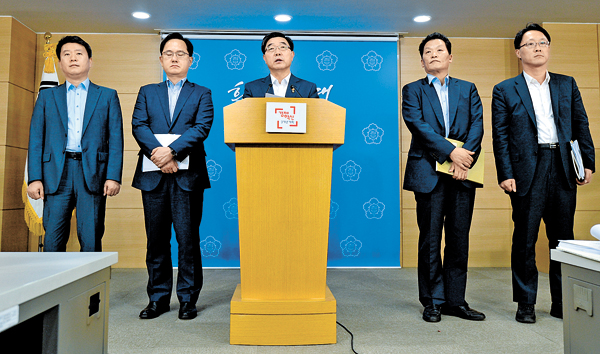 The government announced a detailed plan to encourage private companies to adopt the so-called peak wage system as part of its efforts to reform Korea’s labor practices despite protests from labor unions.

Employment and Labor Minister Lee Ki-kweon held a briefing on Wednesday and said the government will increase support and subsidies for private companies adopting the new wage system as well as release guidelines to urge both employers and employees to discuss the adoption of the system.

The controversial system is designed to gradually cut salaries of senior staffers after they peak at a certain age, generally between 55 and 60. Korea’s retirement age will be legally extended to 60 from an average of 57 starting next year at all private and government-run companies.

All 316 government-controlled companies and organizations will be forced to implement the new system in 2016 but it is not mandatory for private companies.

Under current law, management of private companies can’t revise their wage systems without the consensus of a majority of employees if the revisions are seen to be “disadvantageous” for workers.

In a detailed report released Wednesday on how the government will push the system with the private sector, the Labor Ministry said it will present guidelines to urge both management and unions to apply the system in their workplaces.

“Management of some private companies can’t even bring up the issue as their unions refuse any discussion about the system,” said a Labor Ministry official by phone. “So we will offer a guideline that would encourage employees to discuss the issue at least.

“Still, it is just a guideline, not a binding rule for unions,” he said. “Adopting the system or not is still a matter to be negotiated by both parties.”

Although the government says the guidelines will be non-binding, the Korean Confederation of Trade Unions, a major association of labor unions, says the government is effectively forcing private sector employers to adopt the system.

Given the fact that about 90 percent of Korea’s workplaces don’t have unions, the group says the new system will eventually be implemented in most private companies.

The government says the peak wage system is required to cut salaries of the oldest employees to give companies room to hire people out of college. Unions say they don’t believe the retirement age will be extended at all companies, particularly at small enterprises, and the new system is merely a ruse to save corporations money at the expense of workers.

“The policy announced today is the government’s attempt to accelerate its reform plan for the labor market in the worst possible way,” said representatives of the confederation at a press meeting in front of the Central Government Complex in Seoul. “Through the guidelines, the government is trying to make it mandatory for companies to adopt the peak wage system, not only in the public sector but also in the private sector.”

The confederation has announced a nationwide protest rally on June 27 against the implementation of the peak wage system. The Federation of Korean Trade Unions, another group of unions, announced it will stage a general strike in July.