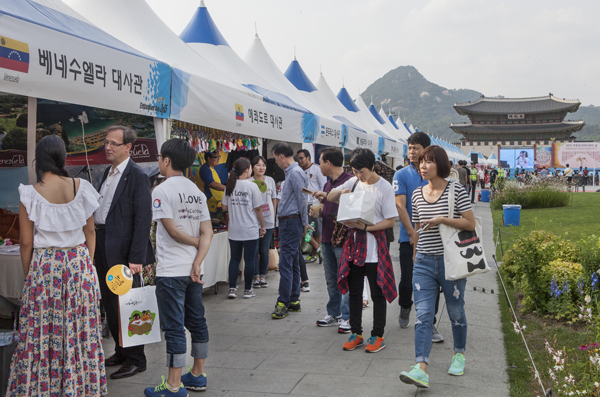 People visit booths set up at Gwanghwamun Square, central Seoul, Friday, for Embassies Day in Seoul 2015. The three-day event features cultural performances and items from countries around the world. By Park Sang-moon

Drawing people from all over the city of Seoul, the second Embassies Day kicked off Friday in Gwanghwamun Square, central Seoul, with 71 foreign embassies participating in the three-day event.

“It is my personal pleasure to welcome you all today to the Embassies Day in Seoul 2015, where we can enjoyably celebrate our common wealth, language and DNA, namely: Culture and Arts,” said Moroccan Ambassador to Seoul Mohammed Chraibi in a congratulatory address at Friday’s opening ceremony.

This is the second year for the event, which is organized by the World Masters Committee, an international cultural NGO in Korea that seeks to promote understanding and harmony between different countries.

“Following the success of last year’s event, I would like to share how exciting it has been to organize today’s event, which seeks to communicate to the world through art and culture,” said World Masters Committee Chairman Kim Min-chan.

The event began with music by tenor Jang Eun-hoon, who performed gagok, a mixture of emotional and poetic lyrics accompanied by instrumental music. A traditional Korean tea ceremony and hanbok fashion show followed.

The square was lined with booths run by over 30 embassies wanting to promote the culture and arts of their countries through food and cultural items.

“We want to share our national souvenirs, culture and carpets,” said Tazegul Mammetalyyeva, wife of the ambassador of Turkmenistan to Seoul, pointing to a textile piece laid on a table in the Embassy of Turkmenistan’s booth.

“They’re the main pride of our country. Our national flag includes the ornaments found on these carpets,” explained Mammetalyyeva. She held up a pair of cloth indoor slippers worn in Turkmenistan and pointed out a poster for a free children’s drawing competition the Embassy of Turkmenistan is running through this summer.

Other embassy officials were similarly enthusiastic about sharing their countries’ cultures at the event. Jairo Lopez, minister-counsellor and consul general for the Embassy of Costa Rica, said he wanted to share “everything” about Costa Rica.

“Well, first coffee,” said Lopez with a grin as he turned towards the different types of Costa Rican coffee showcased in the country’s booth. “But more than that, ‘Pura Vida’ (Pure Life), which is our motto, to transmit our happiness to Korea.”

Lopez also said he was looking forward to the programs for the event, which some of the embassies contributed to.

Traditional performances from Indonesia, Ecuador and Brazil are scheduled for Saturday afternoon, and Sunday offers a Rwandan dance performance.

“We’re here to promote our culture, which is a very rich culture,” said Claude Ganza, the first counselor for the Embassy of Rwanda in Seoul.

“We’re here to share our food, culture, [the work of] our artisans, and develop friendships with the Korean people,” explained Oscar Gustavo Herrera Gilbert, ambassador of Ecuador to Korea.