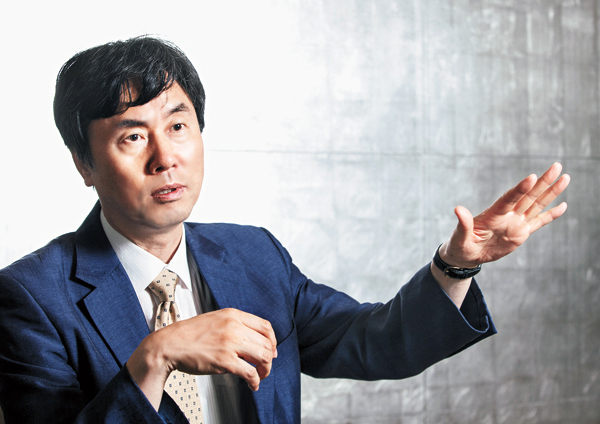 Kim Ki-chan, the newly minted president of the International Council for Small Business (ICSB), believes the best way for companies to generate high profits is to respect employees and encourage them to enjoy their work, rather than laying off workers to cut labor costs.

“So far, neoliberalism has pushed companies to endless competition and restructuring by laying off employees,” Kim said. “But now, the new management model for capitalism should be ‘entrepreneurship for humanity,’ in which companies shouldn’t order employees to work hard, but rather help them enjoy working and realize their dreams through working.

“But the final step, which I strive for, is to work for humanity and society,” he said.

As the second Korean head of the world’s oldest organization studying small and medium enterprises (SMEs), Kim said he would promote and share the successful cases of Korean businesses and the philosophy of Korean entrepreneurs.

“Although many Korean conglomerates are known for their entrepreneurship, the best examples are seen in Korean SMEs,” he said. “I want to share the Korean experiences, dubbed K-entrepreneurship, through the council’s various activities - particularly with business leaders in underprivileged countries in Asia who lack the chance to learn from such cases.”

Kim, who is also a business management studies professor at the Catholic University of Korea, sat with the Korea JoongAng Daily on June 18 for an interview in Seoul, to present his goals and ideas as the new head of the council.

The following are excerpts of the interview.

Q. As the new president of ICSB, what is your biggest goal?

A. My first goal is to establish “heartwarming” companies. I think SMEs should be not only loved by their customers but also by their employees and society. I call this spirit “humane entrepreneurship.”

So far, neoliberalism has focused on restructuring, which means cutting labor costs to survive competition. But now I think employers should make their workers have a dream and realize it through their job, as well as help them have fun while doing so. When people really enjoy their work, it can ultimately contribute to the development of the corporation.

On the contrary, many Asian entrepreneurs, including Koreans, have pondered the reason a corporation exists, not just how to make profits. Some Americans, such as Peter Drucker, also studied about the “mission” of entrepreneurs.

To strive for Entrepreneurship 3.0, I will form a committee at the council, dubbed “Definition Committee of Entrepreneurship 3.0” where experts from various international organizations such as the UN, OECD [Organization for Economic Cooperation and Development] or the World Bank gather to discuss issues. I’m planning to include a representative of female employees on the committee as well.

As the second-ever Korean named to the post, do you have any specific plan regarding Korea?

I will promote and share the so-called Korean experience, the know-how and experience of Korea’s successful entrepreneurs. When I was born in 1958, Korea was one of the poorest countries in the world, similar with Ghana or Malaysia. But now, Korea’s gross domestic product per capita is nearly $30,000, while Ghana still ranges around $1,000 and Malaysia is near $10,000 only.

Particularly, I want to spread the stories of how Korea overcame the post-war poverty and devastation similar to some Asian countries. For instance, I think Myanmar could learn from Korea’s experiences in 1970s, as Korea’s GDP per capita then was similar to Myanmar’s today, around $1,000.

In fact, many business leaders and government officials in underprivileged Asian countries told me that they lack the chance and budget to learn from overseas experiences. Some Asian leaders confessed they can’t even afford for the annual membership fee for the ICSB, even if they want to attend a forum held abroad. So for those countries, I’m planning for a fund-raising to support their membership fees.

Can you give an example of the successful Korean companies whose stories can be shared with other countries?

Korea has a lot of moving stories regarding entrepreneurship. In Samsung Electronics, a manager was sent to India in 1990s, to be in charge of a factory of the company there. Although he was quite frustrated working in India in the 1990s, he set up three goals: to make the Samsung factory in India one of India’s cleanest, fastest, and hard-working workplaces. And he did that within two years. The factory he managed became so locally renowned that it became one of the essential training courses for Indian officials to visit and learn the developed business management of Korea.

But those Korean experiences are mostly found in conglomerates, aren’t they?

No. Korea has more such cases of humane entrepreneurship at SMEs. Dongshin Hydraulics, a maker of injection molding machines, was one of the Korean SMEs struggling with disputes with their workers. However, the current CEO, Kim Byung-gu, who succeeded his father’s business, established three principles to resolve disputes with his workers, dubbed “Three Things” for employees: “Thing to laugh, thing to hope, and thing to enjoy.” Under the phrase, he tried to respect his employees, not as components of the company, but as effective leaders of the organization. As a result, the company has recorded more than a 250 percent increase in total sales over the past five years. That is one of the examples proving how Korean entrepreneurs strive for humanity in management.

Do you have detailed action plans to promote your idea of “humane entrepreneurship”?

I will launch the “ICSB Humane Entrepreneurship Award” which will be given to the best entrepreneurs in the world who are dedicated to humane entrepreneurship and globalization. Also, I will open programs for university students to learn about cases of showing humanity in entrepreneurship, dubbed ICSB Global Entrepreneurship Academy. Also, the council is planning to launch a joint study with National Research Foundation of Korea on “healthiness of ecosystem” in SMEs worldwide, to boost competitiveness of the companies in a long-term. It is also as part of the government-run foundation’s programs dubbed “Social Science Korea,” to study social science issues in the country.