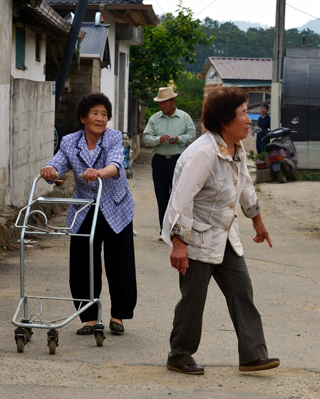 Residents of Jueum in Boseong County, South Jeolla, walk around their village Monday after being released from quarantine. The town was completely sealed off after one resident was confirmed to have MERS on June 10. [NEWSIS]

A debate over the maximum latency period for Middle East respiratory syndrome (MERS) reignited this week despite the outbreak appearing to be on the downswing, with some patients believed to have begun exhibiting symptoms after a full two weeks.

The Ministry of Health and Welfare announced three new confirmed MERS patients on Monday, bringing the total number of cases in Korea to 172. It also announced the passing of Patients No. 101 and 128, raising the death toll to 27.

Controversy surrounding the disease’s maximum two-week latency period, recommended by the health authority, arose after Patient No. 171, a 60-year-old woman, was reported to have visited Samsung Medical Center’s emergency room between May 27 and 29, when the virus was transmitted to about 80 other people from Patient No. 14.

“Patient No. 171 had a slight fever between June 9 and 11, but she tested negative in her initial examination on June 10,” said Jeong Eun-gyeong, an official for the Korean Centers for Disease Control and Prevention. “She’s been quarantined since then and was confirmed to have the virus after she experienced a high fever on June 17.” 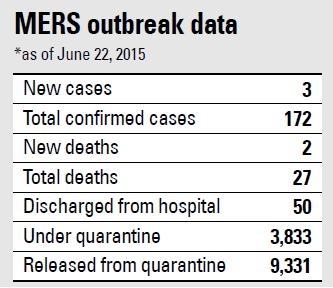 Officials said that even supposing Patient No. 171 contracted the virus on May 29, she still began exhibiting symptoms five days after the maximum latency period for the disease.

The health authority added that the possibility that the initial test result was inaccurate should not be ruled out, as she could have been in the early stages of infection. Another possibility is that she was infected by her family members. She visited the emergency room with her husband and son, who stayed with her until they were also confirmed to have MERS on June 11.

It is also possible that Patient No. 172, a private nurse for Dae Cheong Hospital in Daejeon, also began exhibiting symptoms more than two weeks after she came into contact with MERS patients. The 61-year-old worked at the hospital in May and had contact with Patients Nos. 16, 30 and 54 until June 1. She started showing symptoms on June 15, exactly 14 days after her last day of exposure.

The hospital worker was released from quarantine on June 13 due to a miscalculation by the health authority, and reportedly visited a local government office before reporting her symptoms. Also on Monday, three more hospitals in Guri, Gyeonggi, came under the health authority’s inspection after Patient No. 170 was found to have visited those facilities before being confirmed for MERS on Sunday.

She was exposed to the virus via Patient No. 76, who died on June 10, at Konkuk University Medical Center.

Patient No. 170 was out of the government’s quarantine coverage because her hospital room was not near the area in which Patient No. 76 stayed for five hours on June 6. As a result, the government has belatedly taken the patients who stayed on the same floor that day, as well as the medical staff, into quarantine.

The main opposition New Politics Alliance for Democracy (NPAD) released a statement on Monday to criticize the government for its poor handling of the MERS outbreak and called for an emergency meeting with the government and the ruling Saenuri Party to cope with situation, as well as a severe drought that has overwhelmed the central Korean Peninsula.

“The government, which is supposed to protect the lives and safety of the people, is now being questioned by them,” said NPAD Chairman Moon Jae-in, in reading the statement.

“We need President Park Geun-hye to offer a sincere apology,” he continued. “She needs to acknowledge what she did wrong and seek cooperation [from the people], and that’s where we can begin to solve this problem.”

On Monday, quarantine measures in place on Jueum in Boseong County, South Jeolla, were lifted. The town was completely sealed off after one of its residents, Patient No. 113, was confirmed on June 10 to have MERS. The quarantine was lifted following his full recovery and in the absence of any more potential patients in the village for the last two weeks.