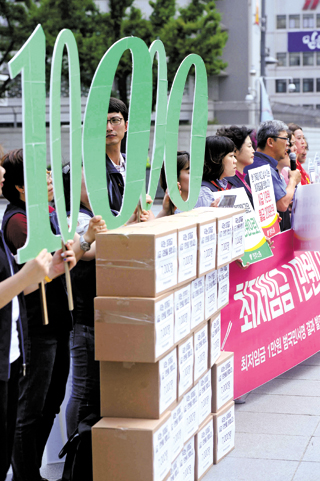 Members of the Korean Confederation of Trade Unions (KCTU) and Korean Women Workers Association (KWWA) rallied on Tuesday at Gwanghwamun Plaza in central Seoul. The labor union was protesting against the business lobby group Korea Employers Federation (KEF), who proposed a freeze on the minimum wage citing an increased burden on businesses. The protestors demanded the minimum wage be raised to 10,000 won ($9) per hour, from its current 5,580 won. [NEWSIS]