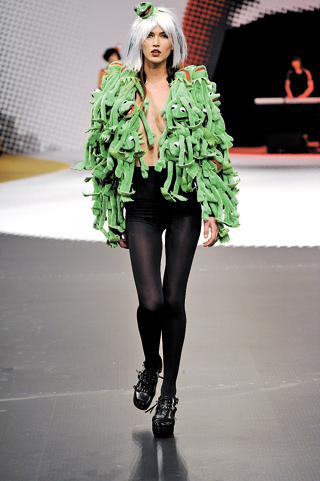 French fashion designer Jean-Charles de Castelbajac says his inspiration for fashion and art comes from his experiences and accidents.

When he spoke at Dongdaemun Design Plaza on June 12, Castelbajac brought along a huge bag full of items which he used to talk about his childhood and development as a fashion designer.

Castelbajac was visiting Seoul for his first art exhibition in Asia at the Blue Square’s Nemo in Hannam-dong, central Seoul. The exhibition lasts until Friday.

Holding out a pair of bright pink rubber gloves, the designer talked about an incident during his childhood when he encountered an Englishman, whom he thought was the “most elegantly dressed gentleman he’d ever seen.” 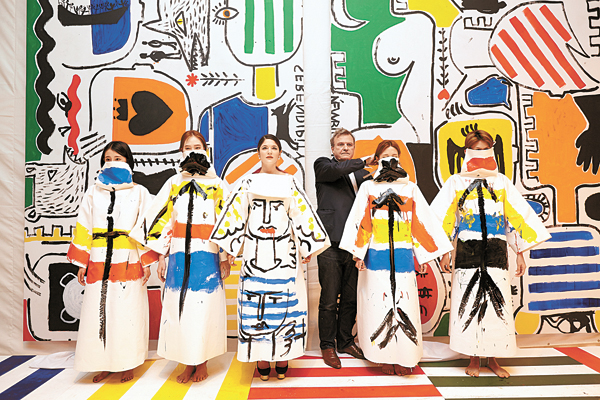 French fashion designer and artist Jean-Charles de Castelbajac poses with his models after a performance at the opening of his first Asian art exhibition, held at Blue Square’s Nemo in central Seoul. Provided by the organizer

The man was wearing a large cape and pants that came down to just below his knees. But above all, what the young Castelbajac liked the most about the man’s outfit was the pink rubber gloves on his hands.

“This English nobleman was wearing the most elegant garment, and then he was wearing these pink rubber gloves you wear for washing dishes,” said Castelbajac. “But all his friends around him didn’t seem to be surprised at his appearance at all.

“The reason why I talk about my childhood is because this is the process of my creativity,” said the avant-garde designer. “From the time I met that Englishman, I don’t pursue perfectionism. For me, perfectionism is boring and doubtful. I love accidents.”

Castelbajac’s personality explains why he works closely with pop icons like Lady Gaga. He is known for dressing her in a Kermit the Frog-themed outfit nine years ago.

“She came to me asking me to make her somewhat experimental and unusual,” he said.

“She said it was her first television appearance and she wanted to leave a vivid impression. So I went to Disney Land and bought 100 Kermit the Frogs.”

“When she was seen wearing it, People magazine picked the outfit as the ugliest outfit in human history,” said Castelbajac, laughing. “We thought we were pretty successful.”

The designer also explained that the design that brought him worldwide fame came from a shocking childhood experience. He recalled visiting his mother’s friend, a priest who conducted exorcisms. Castelbajac was horrified to see an enormous pile of teddy bears with their bellies cut open.

When the priest performed exorcisms on young children, Castebajac said, he would cut open their toys to remove any evil spirits or black magic hidden inside.

“I had forgotten about this incident for 20 years,” said Castelbajac. “But when I remembered, I turned [the memory] into a famous teddy bear coat that made my name known to the world. Fashion for me is not just fashion. It’s a work of accumulating my past experiences, putting them in one place and looking back upon my life.”