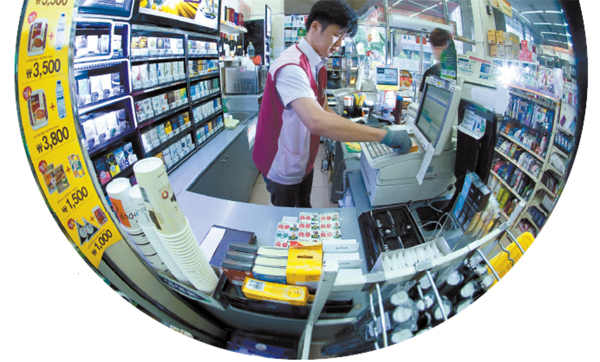 The minimum wage for next year is set to be determined today by the Minimum Wage Council.

Since last week there have been demonstrations by labor unions including the Korean Confederation of Trade Unions, the New Politics Alliance for Democracy and civic groups demanding that the minimum hourly wage be raised to 10,000 won ($8.97), nearly 80 percent above the current level of 5,580 won.

But the business community wants to maintain the minimum wage or raise it no more than 1.6 percent, as suggested by the Korea Employers’ Federation. Business organizations say a lower minimum wage would reduce costs for employers and preserve jobs.

Labor and management representatives will trade demands at the fifth session of the council tomorrow.

The Minimum Wage Council consists of 27 representatives of unions, business lobby groups such as the Federation of Korean Industries and the Korea Employers Federation, academics and researchers.

The council issued a wage study and survey on the effects of a higher minimum wage.

According to the study, if the hourly minimum wage is increased to 10,000 won, 46 percent of the total labor force will be earning that much. That’s a sharp increase from the 12.8 percent of the workers covered by the current minimum wage.

The extra costs will be significant, particularly for small and midsize companies, business lobbying groups insist.

“A sharp increase in the minimum wage would undermine the performance-based system,” said an official from one of the business lobby group who requested anonymity. “This is the same as denying a free market economy.” 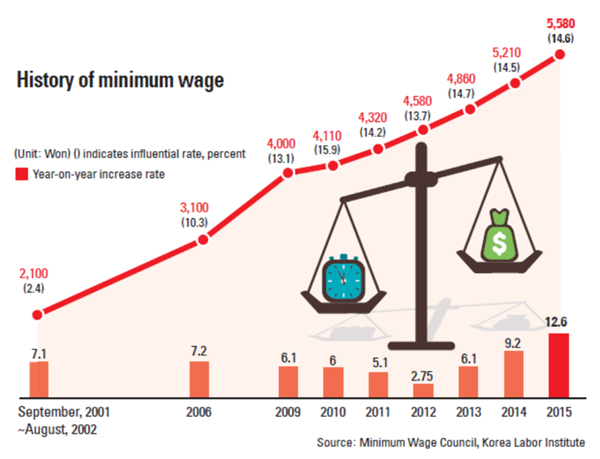 In Netherlands, known for its social welfare policies, only 6.2 percent of all jobs were paid minimum wage as of 2012. The situation is similar in other countries including the UK (5.3 percent) and even Japan (7.4 percent).

The study also showed that many workers were not pushing for such a significant increase in the minimum wage. A survey conducted by the Minimum Wage Council showed that 56.3 percent of workers polled wanted a single-digit increase. 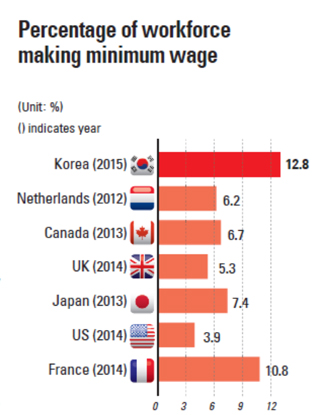 The poll showed that many agree that the current minimum wage is not enough to maintain a decent life. But they also worry about jobs being cut if the minimum wage is raised too much.

“There are several factors that need to be considered,” said a worker at an automotive parts manufacturer in Gwangju. “I would be in a difficult spot if I lose my job because the minimum wage was hiked significantly.”

A worker at an automotive part supplier in Busan said he was willing to share shifts with coworkers while maintaining the current level of minimum wage if a hike in minimum wage would means job cuts.

“The minimum wage has gone up so high that labor now accounts for 50 percent of primary production costs,” said an official at a textile company in Gwangju. . “We’re going to move our factory work to Vietnam.”

“If the minimum wage is raised, we have no other choice but to lower the paycheck of other workers,” said an official at an automotive part company in Busan.

A survey done in March by the Korea Employers Federation and the Korea Federation of SMEs showed that nearly half of the small and midsize companies like restaurants plan to either reduce the number of new hires or even cutting existing staff.