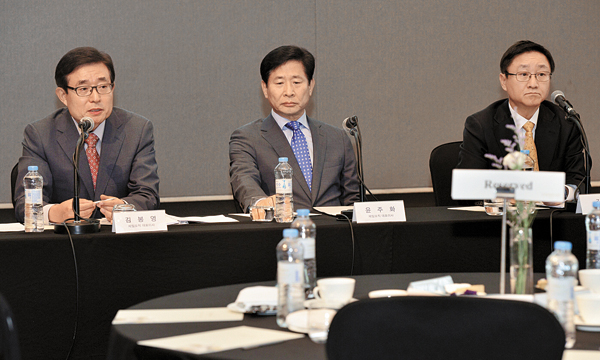 The announcement during an irregular investor relations session is Samsung’s latest effort to convince investors of the benefits of the proposed merger between Cheil and Samsung C&T, after the plan was challenged by U.S. activist hedge fund Elliott Associates.

Yoon Joo-hwa, head of Cheil’s fashion division, said the company will increase the dividend payout ratio to 30 percent by 2020 from its current 21 percent.

“We will gradually raise the ratio considering the company’s investments,” he said.

The executive also made it clear there’s no alternative plan if the merger falls through at the meeting scheduled for July 17.

Elliott Associates, the third-largest shareholder of Samsung C&T, has sought injunctions to block the meeting from being held, saying the merger is unfair to Samsung C&T shareholders.

The court is scheduled to rule on the case Wednesday.

This is the first time a Samsung unit will have such a body, implicitly highlighting the importance the group attaches to the planned merger.

“We will continue to communicate with stakeholders [when the merger is completed] to ensure independence,” said Yoon. “The members will consist of outside directors, and the body will review transactions, as well as mergers and acquisitions.”

The session was also attended by Kim Shin, head of Samsung C&T’s trade business, and Yang Cheol-bo, a director at the group’s biopharmaceutical arm Samsung Bioepis.

Participating Samsung heads devoted much of the session to explaining the expected benefits of the merger, though many observers see the merger as a move to strengthen control of Samsung’s owning family - especially Jay Y. Lee, the only son of ailing Chairman Lee Kun-hee.

Since the younger Lee is the top shareholder of Cheil, Lee will also become the largest shareholder of the entity that owns stakes in Samsung Electronics and other key affiliates.

Kim of Samsung C&T said the combined entity will further grow since Cheil is the major stakeholder of Samsung Bioepis.

Bioepis announced Monday it is considering going public on the Nasdaq, planning to raise about 1.5 trillion won ($1.3 billion).

Samsung Biologics is the largest shareholder of Samsung Bioepis.

The group has reiterated that the bio industry is a promising area, as reflected in Samsung Group’s investment of more than $2 billion in biopharmaceuticals, especially generic drugs or biosimilars.

“When people consider the long-term value and Cheil’s position as a de facto holding company, the proposed ratio can be seen as rational,” Yoon said.