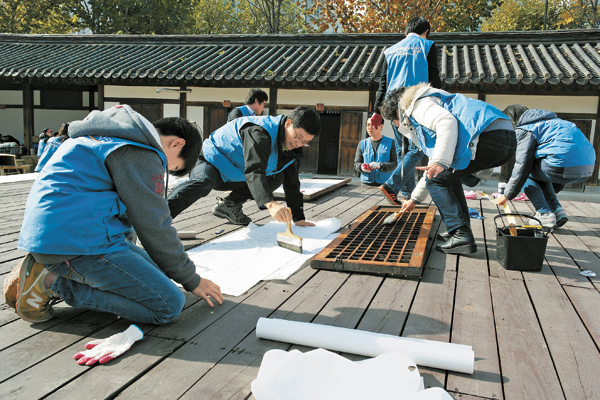 Posco volunteers participate in preserving Unhyeongung, the residence of King Gojong (1852-1919) before taking the throne. Provided by the company

Posco is giving back to the local community with a focus on the Pohang, Gwangyang and Seoul areas.

As a leading conglomerate, the company has always emphasized regional cohesion. This was considered especially important for the city of Pohang, North Gyeongsang, its home, and neighboring cities.

In 1988, twenty years after the corporation was established, its employees started volunteering for and supporting local, so-called sister villages.

Currently, employees participate in regular volunteer sessions. The third Saturday of each month is set aside for this purpose, during which nearly 5,000 employees visit community welfare centers to lend a hand.

Board members aren’t exempt either. Executives help out at local small or medium-sized enterprises and provide business consultation.

Furthermore, in Gwangyang, South Jeolla, volunteers participate in plastering work for households that need repair but can’t afford to hire professionals. However, to provide a similar level of service, volunteers receive training from a real expert.

Also, Posco offers machinery-fixing services for agricultural vehicles since a large part of the population farms for a living. For this, employees received training at the Gwangyang Agricultural Technology Center.

This shows that Posco considers the quality of volunteer work important, putting effort into offering top services even if money isn’t involved.

Similarly in Pohang, plastering and other household repairs that require extra help are provided by the corporation. From fixing windows to managing electrical appliances, living environments are improved in many different ways.

There are interesting forms of volunteering as well. Some stand up for the preservation of cultural properties across Seoul while others utilize scuba licenses to clean trash and starfish in waters to protect the environment.

Providing support for students by offering education is also a top priority. In addition to offering tutoring sessions at community centers in Gwangyang and Seoul, Posco has developed a program called the Dream Volunteer Group, which helps students learn about future career options.

On June 1, students from Baekhak Middle School in Gyeonggi were invited to the Dream Bridge session held at the Posco Center in Daechi-dong, southern Seoul.

Lecturers included a barista, lawyer and engineer. The corporation’s own employees also attended. Notably, CEO Kwon Ohjoon also spoke at this event about what being a CEO entails.

From 2016, Posco plans to expand its services and travel to different regions to help students across the nation.