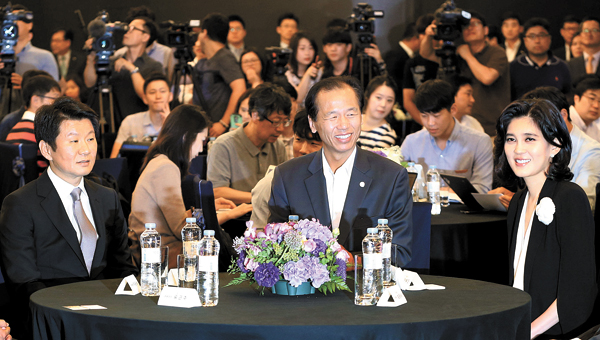 HDC Shilla held a “Vision Proclamation Ceremony” on Thursday, publicizing a commitment to promoting Korea’s tourist industry as part of its bid to secure a license to run the planned duty free shop at I’Park mall in Yongsan, northern Seoul.

HDC Shilla, a joint venture between the hotel and duty free chain operator Hotel Shilla and Hyundai Development, which owns I’Park mall, plans to revamp the Yongsan shopping mall into a “Duty Free Land” with floor space of 65,000 square meters.

HDC Shilla said it planned to work with Seoul city and provincial governments to promote tourism in remote parts of Korea. I’Park mall is adjacent to one of the two Seoul terminals of the KTX express train that links Seoul with the rest of the country.

HDC Shilla also has plans to boost the Yongsan district economy, collaborating with the electronics retail cluster there to re-develop it as a major destination for foreign tourists. HDC Shilla will work with electronics shop owners in the area to build the necessary facilities and set up marketing programs, the company said.

It will also set up a separate hall of 3,700 square meters to display products manufactured by the country’s small and medium brands.

The hall will be divided into a K-Cos Zone (Korean cosmetics), K-Bag Street (Korean-made bags), and other sections for provincial agricultural produce and specialty products. At the Korean Food Masters’ hall, it will sell liquors and vinegars made by the country’s top culinary firms.

“We will have foreign tourists enter the Seoul metropolitan area from nearby areas on trains bound for Yongsan,” said Chung Mong-gyu, the chairman of Hyundai Development at the ceremony. “We will open an era of 20 million tourists, thereby boosting the regional economy,” he added optimistically.

“I am confident that HDC Shilla will see good results,” said Choi Moon-soon, Gangwon’s governor, adding that he wanted HDC Shilla’s investment in a new hotel in Chuncheon, the provincial capital, which is linked to Yongsan Station by the ITX express train.

At the center of media attention was Lee Boo-jin, the Hotel Shilla CEO and the daughter of Samsung Group’s chairman Lee Kun-hee. But dressed in a black cardigan with an ivory flower corsage and an ivory dress, she was a woman of few words.

When approached by the media she said “The Seoul duty free store should work out well.”

The Korea Customs Service is set to pick three final bidders for licenses to operate duty free shops in Seoul by July 10.

Two will be given to large corporations and one to a smaller company. Bidders include HDC Shilla, Shinsegae, SK Networks, Lotte, Hyundai Department Store, Hanhwa Galleria and E-Land.

The customs service will grade each bid based on the company’s management capability, supervision capability, and environmental factors that include nearby tourism infrastructure, the company’s contribution to society and its relationship with small and medium businesses.