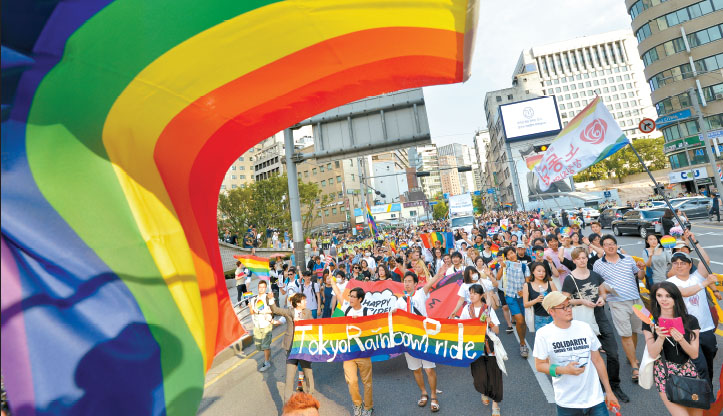 The past two weeks have been overwhelming for Korea’s lesbian, gay, bisexual and transgender (LGBT) community, with two rare events that potentially offer a glimmer of hope for equal treatment taking place just two days apart.

On June 26, the U.S. Supreme Court made a landmark ruling that legalized same-sex marriage in all 50 states.

The decision was hailed by a string of prominent figures in America, including President Barack Obama who called it a “victory for America.”

“Today marks a victory for equality, perseverance and love,” tweeted Apple CEO Tim Cook, who came out in October.

That night, the White House was illuminated in rainbow colors, the symbol of the LGBT community, as hundreds gathered outside to join in the celebrations. 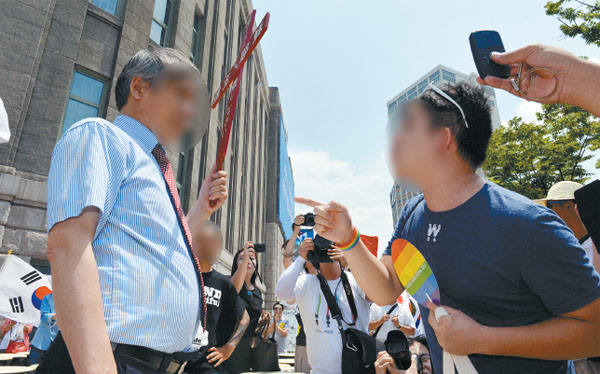 A member of a Christian group, left, and a participant in the Korea Queer Culture Festival confront each other. [NEWSIS]

Two days later, the LGBT community in Korea was able to hold their long-awaited Pride Parade in the center of Seoul after winning a legal battle against conservatives and police, who claimed that the parade would compromise safety.

“The police initially banned our event, but due to the Seoul court’s ruling, we were finally able to proceed with the parade,” said Kim Ji-yeon, a member on the organizing committee.

The Korea Queer Culture Festival kicked off at 11 a.m. at Seoul Plaza in front of City Hall, a representative venue for all sorts of large-scale events, where dozens of activist groups and foreign embassies set up their booths.

Some 30,000 people participated in the festival, according to the organizer, the largest yet. Around 2:50 p.m., U.S. Ambassador to Korea Mark Lippert made an appearance, taking photographs at the U.S. Embassy’s booth. He reportedly also visited the organizing committee’s booth to deliver words of encouragement.

However, it was not all celebratory around City Hall. 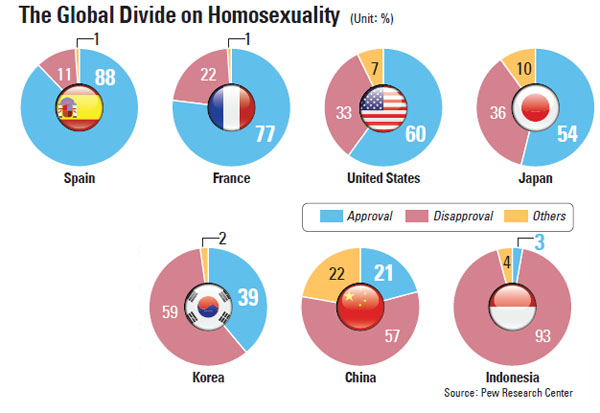 Just around the corner from Seoul Plaza in front of Daehanmun, a number of conservative religious groups held their own rally, with 10,000-some people gathering to condemn the gay pride festival, holding up their own banners and placards that read, “We oppose because we love” and “Homosexuality Out!”

During the final event at 5 p.m. - a 2.6-kilometer (1.6-mile) march - which began at Seoul Plaza, a number of protesters jumped into the parade, initiating physical altercations with police officers.

Nevertheless, the organizer said this year’s festival could be lauded as one of the most successful yet.

The fact that the festival was permitted to be held independently at Seoul Plaza was meaningful - in previous years, the parades were held near universities or relatively remote neighborhoods.

This year’s event, it said, was “a step forward to achieving a more diverse society.”

In recent years, public sentiment toward the LGBT community has also lightened.

“It is an annual chance that they can reveal their real identity. I want them to enjoy themselves fully,” festival-goer No Seon-yi told the local media outlet Newsis.

No attended the event with two of her children, 2 and 4 years old.

“I want to show my children that there are diverse kinds of people in the world,” she added.

More open and direct support from celebrities and public figures has increased online as well.

Hong Seok-cheon, Korea’s first openly gay celebrity, uploaded a picture of himself participating in the parade on his social networking account, with a comment that read, “Happiness to all.”

Lim Geun-jun, a renowned art critic in Korea, who just recently came out, placed a rainbow filter over his profile picture on his social media account, with the comment, “With the success of the Pride Parade, I came to realize that there were a lot of people who missed their LGBTQ friends who ended their lives too early. So do I.”

Allies of the LGBT community also showed their support by applying rainbow filters on their Facebook profile pictures.

However, despite the shifting public attitudes toward sexual minorities, the gay community here still has a long way to go before same-sex marriage can be legalized in Korea.

One representative case is that of openly gay couple Kim-Jho Gwang-soo, a film director, and Kim Seung-hwan, who heads the queer film distributor Rainbow Factory. 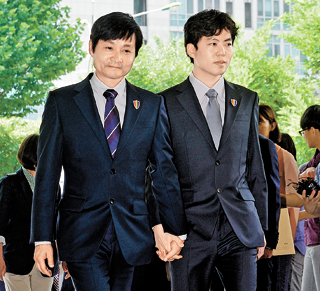 Kim-Jho Gwang-soo, left, and Kim Seung-hwan, publicly wed in 2013. However, their union has yet to be recognized in Korea. Provided by Rainbow Factory

The two held a wedding march in September 2013.

However, when they submitted their marriage application to the Seodaemun District Office, they received notice four days later that their marriage could not be recognized.

The couple’s legal representative argued at the time that neither Korea’s Civil Law nor its Constitution prohibited same-sex marriage in any clear terms.

Article 36, Paragraph 1 in the Korean Constitution states: “Marriage and family life shall be entered into and sustained on the basis of individual dignity and equality of the sexes, and the State shall do everything in its power to achieve that goal.”

Civil laws also do not mention anything about same-sex marriage, only prohibiting incestuous marriage, polygamy and marriage between minors.

Determined to gain the legal status of a married couple, the men filed a suit last year with the Seoul Western District Court to protest the decision.

Whether Kim-Jho and Kim will be able to claim their rights depends on how the Civil Law is interpreted.

According to the Supreme Court’s decision on September 2011, changing one’s sex is not allowed when he or she is either already married or has children under the age of 19 because doing so could “jeopardize the spouse or the child’s social status and bring chaos to society.”

Majority opinion during the session was also laid out: “If we allow an individual who is already married to change his or her sex, it would be tantamount to admitting same-sex marriage, which is not allowed under current law.”

However, Kim-Jho’s legal representative had a markedly different idea, arguing that, “current civil law is more than enough to approve same-sex marriage.”

According to the application that the couple submitted in their appeal, Korea’s civil law “does not indicate terms that distinguish sex in terms of marriage, unlike the U.S. law, which precisely disallows marriage between people of the same sex.”

It added that approving a marriage between two people of the same sex was appropriate in constitutional terms as well because it “talks about marriage on the basis of equality of the sexes.”

“Traditionally, marriage was considered a conjoining of two people of different sexes,” said a law school professor who wished to remain anonymous.

“However, the only requirement for marriage under current civil law is whether you are over 18 or not. It all comes down to the legislative approach,” he said.

In response toward the renewed attention on their upcoming trial, Kim-Jho wrote on his blog that he wished for “a fair ruling that ensures the equal rights stated in the Constitution,”

He went on to say that, “Although I feel like crying at the thought of not being able to be recognized as a married couple until the day I die, I vow to myself once again that I will not cry in court.”