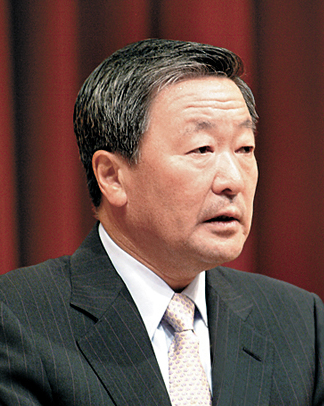 As consumers increasingly shy away from buying expensive new smartphones, the LG Group chairman issued a resounding call to employees for “battle” and “action.”

Financial institutions including NH Investment & Securities on Tuesday lowered their forecast for LG’s operating profit in the second quarter, from 95 billion won ($84 million) to 64 billion won, due to low sales of LG’s latest smartphone, the G4.

Earlier this year, LG was expected to sell more than 8 million units of the G4 in 2015, but investment institutions said it would be hard for LG to meet that estimate. The company would have to sell an average of 2.6 million units in each of the second, third and fourth quarters, but only 2 million units on average are expected to be shipped out during those periods. The G4 came out in April.

At a seminar Tuesday at the LG headquarters in Yeouido, western Seoul, LG Group Chairman Koo Bon-moo encouraged his executives to overcome the group’s overall poor performance, including declining smartphone sales. New regulations on the size of subsidies telecoms can give for smartphones have caused consumers to cool on buying the latest, most expensive models.

“In times of fighting for a lead in the market, we must gather all LG’s strength and drastically take action,” Koo said.

One executive summed up the speech by saying, “LG needs to lead the market by expanding its share in businesses with differentiated services in accordance with the fast-changing environment.”

Chairman Koo also emphasized safety issues at industrial sites, referencing an accident that occurred earlier this year at an LG Display factory in Paju, northern Gyeonggi, at which a nitrogen leak killed three workers and injured three others.