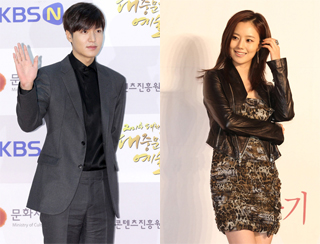 It has been confirmed that actor Lee Min-ho, left, and actress Moon Chae-wo will be honored with the Producers’ Choice Award at the Bucheon International Fantastic Film Festival, or BiFan.

The award has special meaning for both celebrities in that nominees are carefully considered by BiFan and the Korean Film Producers Association. Entertainers who previously received the award include actors Ha Jung-woo and Lee Byung-hun and actresses Jun Ji-hyun and Son Ye-jin, some of the country’s top celebrities.

“Lee has shown great acting ability [in various projects], which have earned him solid popularity. He’s also played a big role in sparking a second Korean Wave, so he deserves the honor,” said a source affiliated with the film festival.

BiFan, which marks its 19th anniversary this year, will open July 16 and run until July 26 in Bucheon, Gyeonggi.

Other award recipients include actor Jung Woo and actress Kim Go-eun, who will be honored with the Fantasia Award. Actor Oh Dal-su, renowned for his comical personas in various hit films, including “Ode to My Father” (2014), is also slated to receive the It Star Award.