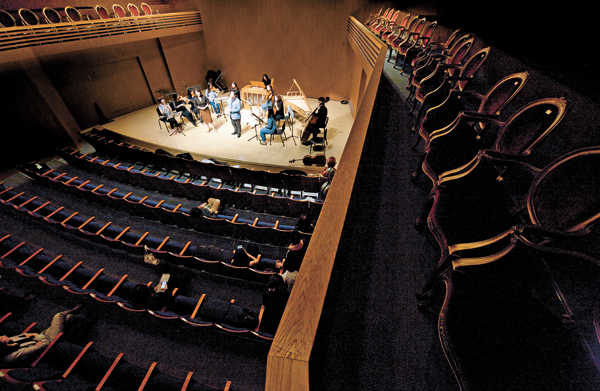 Olympus Hall, a concert hall within Olympus Korea’s Samseong-dong headquarters, is one of the most beloved venues for concerts and recordings by musicians thanks to its excellent sound quality. All of the seats are priced at just 33,000 won (29.84 dollars). By Kwon Hyuk-jae

For Olympus Korea, a company known for its precision instruments and cameras, these particular strengths come in handy for its cultural activities.

From building a high-tech concert hall to running a unique photography program, the company has taken a singular approach to giving back to the community.

When Olympus Korea was constructing its new headquarters in Samseong-dong, southern Seoul, from 2007 to 2010, it decided to build a concert hall on the basement. The company spent a large sum of money on the project, but it appears to have been money well-spent.

Olympus Hall, a 250-seat concert hall, is today one of the most beloved venues for concerts and recordings by musicians of all genres including classical, jazz and gugak, traditional Korean music.

Soprano Sumi Jo recorded at Olympus Hall “Libera,” the album she released in 2011 with Deutsche Gramophon to celebrate the 25th anniversary of her debut.

Korean gayageum (traditional zither) master Whang Byung-ki said, “It’s up to the venue whether or not the audience members can concentrate on each note of the gayageum and breathe with the musician, and Olympus Hall allows that.”

After attending a performance by jazz artists Kenny Werner and Roseanna Vitro, audience members reportedly hailed the venue as the “best place to enjoy jazz.”

Olympus Korea officials explain that in designing the hall they shortened the distance between the stage and the audience and heightened the ceiling, in order to achieve optimal levels of echo, reflection and reverberation. 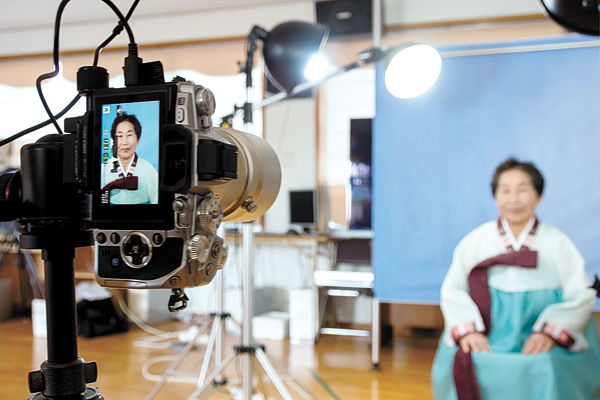 In its Blue Ribbon Project, Olympus Korea photographs seniors - usually those living alone or living with the government’s financial support - for portraits to be used at their funerals. Company officials say the blue ribbon signifies their wish for the subjects to have long, healthy lives. In Korea, funeral portraits usually come with black ribbons.

“Many concert halls today resort to electro-acoustics to make up for inadequacies [in terms of sound],” Kim So-yeon, one of Olympus Korea’s publicists, said. “But no sound equipment, no matter how expensive, can replace sounds that come out of musical instruments played by artists with their souls.”

Olympus Hall was also built using a special engineering method that prevents outside noise and vibration from entering the hall.

The technology, according to Kim, is like “constructing a building within a building.”

Although Olympus Hall is undoubtedly high-tech and upscale, the space is accessible to a wide range of people.

Unlike other concert halls, the seats at Olympus Hall are not divided into different sections according to the quality of the concert-going experience and price. Rather, all seats provide an equal experience priced at 33,000 won ($29.84). With such affordable ticket prices, Olympus Hall does not generate any profit.

Nonetheless, Olympus Korea also makes the space available for special concerts for children from low-income families so that youngsters with limited access to cultural activities can also enjoy musical performances.

Another notable characteristic of Olympus Hall organizers is that they do not limit events to just one type of music or art. There have been many events that combine various genres, such as a photographer and performer teaming up to plan an exhibition alongside a performance, or concerts featuring jazz and classical music.

For that reason, events at Olympus Hall enjoy a high level of popularity. Kim Jeong-im, a manager at Olympus Korea’s social contribution team, also pointed to the fact that having a sole operator, Olympus Korea, gives the venue the freedom to experiment with support from the company’s funding.

The activities of the Olympus Ensemble - a seven-member ensemble launched in May 2012 - also backs up the company’s philosophy that it hopes to enrich the lives of more people with music and arts, not just the lives of the privileged few.The members are violinists Kwun Hyuk-joo and Kim Gyoon, pianist Park Jin-woo, violist Hanna Lee, cellist Park Go-eun, double bassist Sung Min-je and clarinetist Jang Jong-sun. 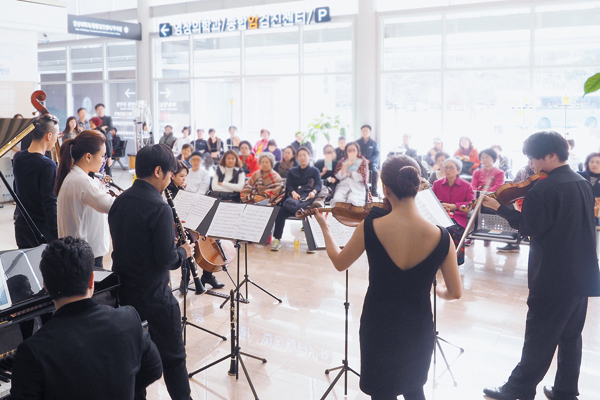 The Olympus Ensemble has been performing at hospitals since 2012, so that patients - especially those undergoing long-term treatment and hospitalization - can gain peace of mind through music. Provided by Olympus

Since its launch, the ensemble has been performing at hospitals so that patients - especially those undergoing long-term treatment and hospitalization - can gain peace of mind through music. As part of this “Healing Concert” program, the performers also visited hospitals and played right beside the hospital beds of children with severe physical disabilities, who have spent most of their lives confined to hospital rooms.

And through a memorandum of understanding (MOU) with the Seoul Foundation of Arts and Culture, the ensemble selected youths from low-income families who dream of becoming classical musicians and gave weekly one-on-one lessons from last June through this March. Among the three youths - who play the piano, violin and cello - two are known to have made it into an arts high school, thus bringing them one step closer to achieving their dreams.

And the program continues this year. Olympus Korea announced on June 22 that this year, all seven members will have a student of their own from the low-income bracket and give a weekly one-on-one lesson between July and December.

Olympus Korea CEO Naoki Okada said that through culture and arts, the company hopes to interact with more people and also alleviate the cultural gap among different groups of people.


What they know best

Among Olympus Korea’s areas of specialty, the most well-known is cameras.

Since July 2013, Olympus Korea has been shooting portraits of the elderly - usually those living by themselves or living with the government’s financial support - to be used at their funeral services.

In Korea, it is customary to place a portrait of the dead at mourning altars where visitors can pay tribute with either flowers or incense. The portrait is also used in the funeral procession.

Working with regional governments and welfare facilities supporting the elderly, Olympus Korea has so far shot portraits for about 1,500 seniors. The activity is dubbed the Blue Ribbon Project. While this type of portrait usually has a black ribbon tied around it, the color blue represents Olympus Korea’s wish that the elderly will live long.

Also involved in the project are photographer Jo Seong-min; hanbok (traditional Korean clothing) brand Jinju Sangdan; and hair and makeup salon Soobin Academy, which all work to make sure the seniors getting their portraits taken get to look their best, as well as just enjoy the whole experience.

To add to the enjoyment, employees of Olympus Korea take part and prepare events like a mini concert or performance.

“There is a saying that if you give your parents a shroud as a present, they will live long,” Go Hwa-jin, the head of the social contribution team told the Herald Business in a recent interview. “By giving the elderly these portraits as a present, we are wishing them a healthy, long life.”

Taking portraits of the elderly began as a one-time event for the company, but the team decided to expand it as a long-term cultural patronage project. The blue ribbon, in the company’s idea, represents hope and peace in seniors’ lives.

Starting in July, Olympus Korea will join forces with the Seoul Welfare Foundation to visit nursing homes in the capital and continue the project.

The company has previous experience working with the foundation. Last year, the company signed an MOU with the foundation and provided 15 cameras to be used in a social welfare program for families with children with intellectual or developmental disabilities, with the cameras eventually given to selected families.

The programs were intended to help families with disabled children strengthen bonds by taking photographs as a hobby.

In March of this year, Olympus Korea was selected by Korea’s Ministry of Culture, Sports and Tourism as an Exemplary Institution for Culture and Arts Patronage.

Olympus Korea was the only foreign firm among the 13 institutions the ministry selected in March as part of the program it began last year in order to encourage the corporate world’s patronage in culture and arts.

The ministry said Olympus Korea scored high in terms of the quality of its culture and arts patronage projects in addition to the fact that the projects have continued steadily.

On May 1, Olympus Korea got a new CEO, Naoki Okada, who most recently was the vice president of Olympus China. As the medical industry is another business area the company is highly invested in, upon inauguration Okada said he will work to improve Olympus Korea’s business in that field.

But according to publicists, Okada is also hoping to carry on the company’s culture and arts patronage projects.

“He’s dedicated to continuing the company’s programs,” publicist Kim said when asked if there will be any change in the company’s direction in terms of its culture and arts patronage projects.

Olympus Hall, meanwhile, has two interesting concerts lined up for the month of July, including a contemporary jazz concert as well as a “lecture concert,” which delves into songs derived from the poetry of German poets Johann Ludwig Uhland (1787-1862) and Justinus Kerner (1786-1862).