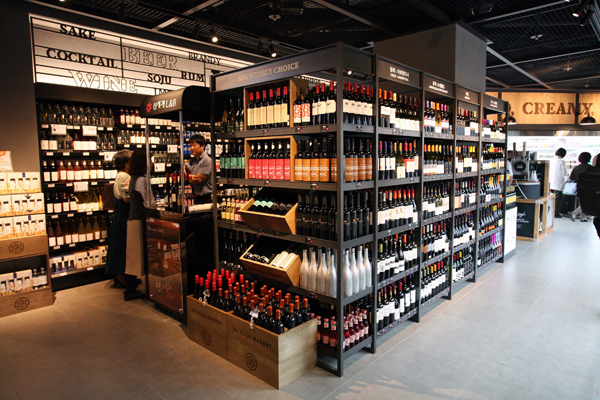 The wine section at the new SSG Food Market in Mokdong, southwestern Seoul, on Wednesday. Provided by Shinsegae

SSG Food Market is establishing a foothold in southeastern Seoul by opening its third store in Mokdong.

Yangcheon District, where Mokdong is located, has a high percentage of upper-middle-income families with kids. The average number of people per household stands at 2.7 persons, the highest among Seoul’s 25 districts.

SSG Mokdong is located near Mokdong Station and among the neighborhood’s many high-rise apartments. The area’s population density is 35 percent higher than Cheongdam-dong, where SSG’s flagship store is located.

According to SSG Food Market, a significant number of the customers at its Cheongdam store are from Yangcheon District, ranking fourth in sales contributions as of last year. Gangnam District, Seocho District and Songpa District were No. 1, 2 and 3, respectively.

“This shows there’s great demand for good food in Yangcheon District, as many of the area’s residents came to our Cheongdam store despite the long distance,” a Shinsegae official said.

SSG Food market, a premium grocery store operated by Shinsegae, has seen steady success since opening in 2012. With a flagship store in Cheongdam-dong, a ritzy neighborhood in southern Seoul, it also has a store in Marine City, Busan.

SSG Food Market’s Mokdong branch will differ from its peers in Busan and Cheongdam, focusing more on offering “good ingredients for family meals at reasonable prices,” according to Shinsegae. Its Cheongdam and Busan branches are better known for selling more eclectic foods that are harder to find at other stores.

Around 75 percent of the store space will be dedicated to organic and locally produced products, and there will be 55 percent more private-label products compared to other SSG branches.

Shinsegae said it has also significantly increased the proportion of directly purchased merchandise to lower prices and secure higher-quality products.

“We were able to increase the share of products purchased directly thanks to our know-how and trust-based relationships with farmers and manufacturers accrued over the past three years,” said Shinsegae executive Lim Hoon.