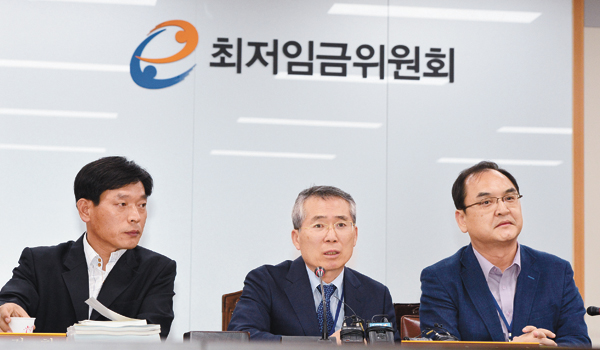 Minimum Wage Council Chairman Park Jun-sung, center, and members of the council announcing the negotiation results at the government complex in Sejong City on Thursday. [NEWSIS]

At a marathon meeting that started Wednesday evening and ended Thursday morning, the Minimum Wage Council, a government body in charge of arbitration, announced that representatives of employers agreed to a proposal by a group of labor specialists to raise next year’s minimum wage to 6,030 won from this year’s 5,580 won through a vote.

A total of 16 representatives cast ballots - seven representing companies and nine “delegates for the public interest,” who are labor specialists appointed by the government - and 15 supported the motion while one opposed it.

Under the current Minimum Wage Act, at least a third of each sector should participate in the vote to decide minimum wages. But if parties refuse to attend the vote despite two notifications from the government, the requirement is waived.

Under the legal guideline for working hours, if a Korean works eight hours a day for five days in a week, he or she actually receives wages for 209 hours per month, which includes paid holiday time.

Thus, the minimum monthly pay for next year will be about 1.26 million won.

“The 8.1 percent increase has reflected current living expenses, the current level of monthly wages of regular or salaried workers, productivity and income distribution in the society,” said Park Jun-sung, chairman of the council, at a press conference after the meeting, which ended at around 1 a.m. Thursday. “About 18.2 percent of all Korean workers, or 3.42 million workers, are estimated to benefit from the pay raise.”

In their initial proposal, unions proposed hiking the minimum wage to 10,000 won, a 79.2 percent increase from this year. Employers wanted to freeze the minimum wage at the current level of 5,580 won.

Even with arbitration by labor specialists, the two sides struggled to narrow the gap at a total of 55 informal and formal talks. 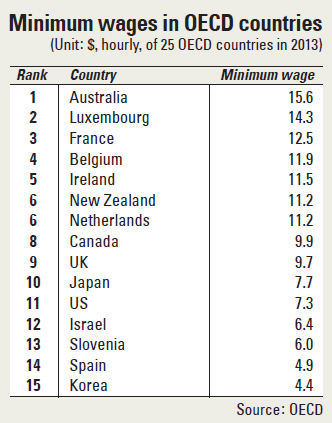 In their latest proposal, unions called for an 8,000-won minimum wage, but employers did not accept it. The labor specialists proposed somewhere between 5,940 won and 6,120 won, but that upset the unions and they walked away from the talks.

After the council’s announcement, unions released statements saying the decision was unilateral.

“The minimum wage raise is 450 won, which can buy two cigarettes,” a statement by the Federation of Korean Trade Unions, a major association of unions whose representatives participated in the negotiation, said on Thursday. “The 8.1 percent increase is just about the average of the figures proposed by the delegates for the public interest, between 6.5 percent and 9.1 percent, who were appointed by the government. So the increase was effectively a government decision.”

“While the public interest delegates colluded with the employers, it is evident that the negotiation was already in favor of the government,” the confederation’s statement read. “Employees can’t participate in effective decision-making.”

The confederation has scheduled a general strike on July 15 to condemn the decision.

Employers said the raise was too high given the sagging Korean economy.

“The raise is a decision that ignored the serious situation of small- and medium-sized businesses (SMEs) in the aftermath of the Middle East respiratory syndrome outbreak and the Greek debt crisis,” said a statement from the Korea Employers Federation on Thursday. “The increase is the highest since 2008, despite the difficulties of the SMEs.

“With the pay raise next year, the additional cost for small enterprises with less than 30 workers is estimated to amount to 2.7 trillion won in total,” it added.

The Korea Federation of SMEs said the raise “was higher than the ability to pay by SMEs.”

Once the Minimum Wage Council submits the decision to the government, the Minister of Employment and Labor will publicly announce it. After then, either unions or employers can submit an objection over the next 10 days. But the Employment Minister has final say.