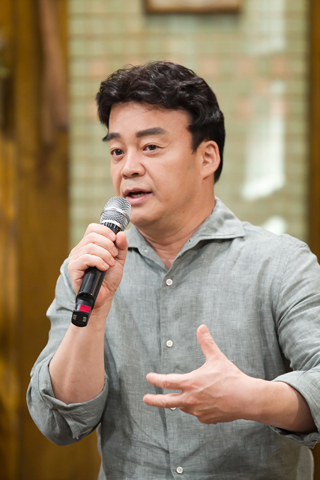 Restaurateur Baek Jong-won, who has risen to popularity with his quick and easy cooking recipes, says he likes his new nickname Baekjubu, which translates to “Homemaker Baek” in Korean.

Baek shares his secrets for making simple food at home on various TV shows, including “My Little Television” and “Mr. Baek, The Homemade Food Master,” and appeared as a judge for the cooking competition “Hansik Daecheob,” which roughly translates to “The Grand Battle of Korean Food.”

One may wonder if he’s qualified to appear on TV and share his opinions on how to cook since he started as a business man. He is the owner of The Born Korea, which operates nearly 30 restaurant franchises that serve dishes like grilled meat and spicy noodle soup.

His franchises are casual spots where one can go dine even at late night. He publicly admits that he is no professional but just someone who loves to cook and wants to inspire others to start cooking as well. 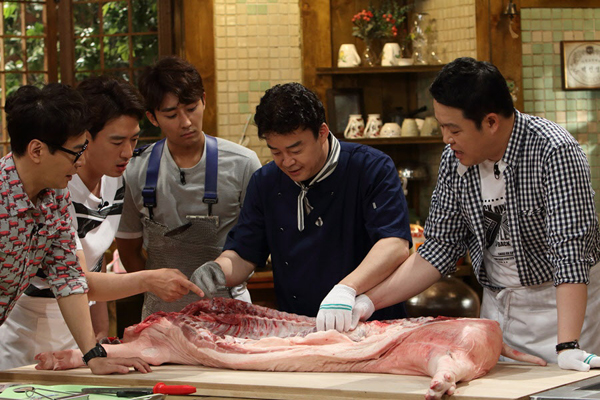 Many have started to imitate the recipes Baek has shared on TV and to compete with one another and brag about how many they have tried. While he has many fans, Baek has faced some criticism as well. Some food critics have said his dishes are not tasty, and many netizens have said he uses too much sugar and salt.

Baek said during a recent interview for his program, “Mr. Baek, the Homemade Food Master,” that he accepts criticism of any kind. He added that critics are doing what they are supposed to do and he respects their comments.

Q. What did you think about the food critic Hwang Gyo-ik’s comment that you are a businessman and your food isn’t tasty?

A. He did what he had to do as a critic and I don’t complain about that. Critics cannot choose to be nice. I have respected him for a long time. I have read his books and remember many of his writings.

What about people who say your food has only two flavors, sweet and salty?

I think there can be such criticism, but in my opinion, I think sweet, salty and spicy are the most important factors in food and the essence is how well you season.

Why do you think you appeal to the public?

I try to be sincere. In fact, I was raised in a wealthier family. But I learned something when I went out of business during the Asian financial crisis. I was really shocked then. I threw away everything [and started over].

Before, when I was running a business, I was superficial when catering to customers, and I was basically acting for people around me. But after what happened then, I tried more to be myself - even when it might look a bit rude or unrefined.

When I start to think that I have nothing to hide, then I can be really sincere in relationships and my cooking.

Do people recognize you on the street?

There were not that many people who recognized me about a year ago, but now, everyone knows me. One thing that is uncomfortable is that I now don’t have the joy of eating out. [When I go to restaurants,] the owners stare as if they are trying to figure out why I’m there. And I feel pressured to make a face showing the food is tasty.

Have you struggled with your newfound popularity?

In fact, I feel a bit confused these days. Whenever I hear that my TV appearances help promote my franchises, I do think about quitting. And it hurts that my being on TV shows has an impact on my franchise restaurants.

But I still do TV shows because I want to develop the restaurant scene further. I don’t think I’m so passionate about continuing to appear on TV programs. I want the new Baek Jong-wons to come out.

I want more people like me, who don’t really have a professional cooking background but are able to teach easy cooking skills to the public. When that happens, I’ll stop making TV appearances.

When I was young, I liked to be called the president. Then when I started running a company, I got used to being called CEO. Everyone called me CEO Baek.

Now I’m called Baekjubu, and I actually like that the best, as it is very comfortable and nice to hear.