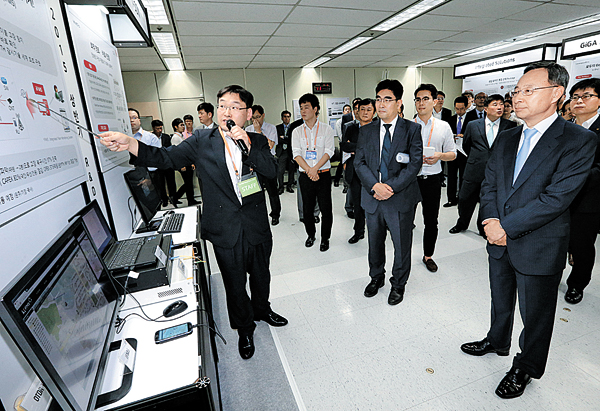 Telecom KT established a research and development center on Thursday to use as a test bed for the next-generation 5G wireless connectivity in cooperation with Samsung Electronics, Ericsson, Nokia, Huawei and ZTE.

The 5G lab will be housed in KT’s research institute in Seocho District, southern Seoul, and bring in engineers and researchers from the partner companies to test enhanced telecommunication technology in different settings.

The opening of the center is KT’s latest foray into a mobile network system that is expected to be commercialized in 2020 with higher speed and lower latency. Latency refers to the time it takes for data to go from one point to another. The lower the latency, the faster the data exchange.

The carrier and manufacturers will be focused on conducting research on 5G-related technologies such as millimeter waves and ultra-dense networks.

So far, experiment in 5G have often been confined to internal lab rooms. From the new center, companies will attempt to expand test clusters to crowded areas nearby, such as Gangnam District.

The company also hopes that research at the center will help it successfully demonstrate the advanced network during the 2018 Pyeongchang Winter Olympic Games.

“Through the opening of the research institute, KT will play an active role in 5G standardization,” said Lee Dong-myun, Chief Technology Officer at KT’s Institute of Convergence Technology.

We’d like to promote Korea’s advanced information and communication technology infrastructure during the Winter Olympics while [KT] demonstrates the 5G technology for the first time in the world.”

Rival telecom companies are competing to play an active role in the creation of standardized 5G technology.

Nokia and SK Telecom recently opened a research center in Gangnam District to research such networks. The lab is located in the new Nokia Korea headquarters.