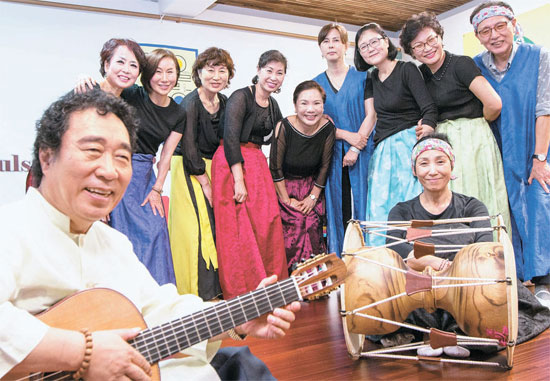 Lee Byeong-uk, a music education professor at Seowon University in Cheongju, North Chungcheong, and Hwang Gyeong-ae, a master of salpuri, a traditional Korean shaman ceremonial dance, are partners both in life and in the arts.

The two performed last Thursday at the Korea Pavilion of the Expo Milano 2015, an international exhibition being held from May to October in Milan, with more than 140 participating countries.

Their performance included salpuri, instrumental solos of the gayageum, a Korean string instrument, and ended with a performance of the well-known Korean folk song “Arirang” - audience members were invited to sing along.

Lee learned folk songs from his grandfather as a young child and picked up the guitar in middle school, learning to play popular and traditional Korean music in addition to Western pop tunes.

Hwang also took up music at an early age, learning how to play the piano, and showed talent in dance, but because her family disapproved, she had to give up both.

Upon marrying Lee however, Hwang danced and played music once more.

“I don’t know if it’s because I couldn’t control my talent or if it was destiny, but I ended up doing music again,” she said.

Thanks to her personal experience, Hwang subscribes to the belief that parents should not prevent their children from doing what they want. Both the couple’s son and daughter are involved in music, and the family has even released an album of traditional Korean music, also known as gugak.

In Milan, Lee performed an old folk ballad arranged to appeal to modern listeners. He also performs with a chamber music ensemble called Byungwook Lee and Oulim that places gugak at the forefront of popular and fusion music.

“We mustn’t consider popular music from different generations to be low-brow,” he stressed. “Rather, it’s important that we draw out elements of popular music through gukak.”

On Monday, Lee is also slated to perform at a celebratory event for the construction of the Arirang Park in Dinslaken, Germany, where Korean guest workers were once dispatched for employment in the local coal mines.

He plans to play a song he composed specifically for the event that expresses the story of the miners who, in order to take care of their families, left their homeland to work in a far-off country.

In line with Hwang and Lee’s musical beliefs, the song combines elements of both popular music and traditional Korean music.