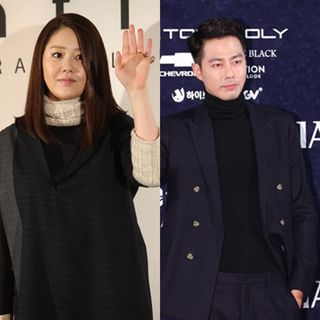 Actor Zo In-sung and actress Ko Hyun-jung found themselves at the center of relationship rumors on Friday, after a photo of the two together at an airport in Japan went viral.

The photo, in which Zo is seen helping Ko carry her luggage, rippled across various entertainment websites and social media.

The IOK Company flatly denied the rumors, stating that, “The two celebrities are known to have visited Japan for different reasons. Even though they departed on different dates, since they are close friends, they arranged their schedules and entered [Korea] together.”

One Korean media outlet also reported accounts by a witness who claimed to have seen Zo and Ko eating and spending time together while abroad. According to the source, the celebrities were quite careless when people spotted them, making it seemingly difficult to believe that they are, in fact, an item.

The pair collaborated on the TV drama “Spring Day” in 2005 and are currently represented by the same talent agency.

Zo transferred to IOK Company in 2012.