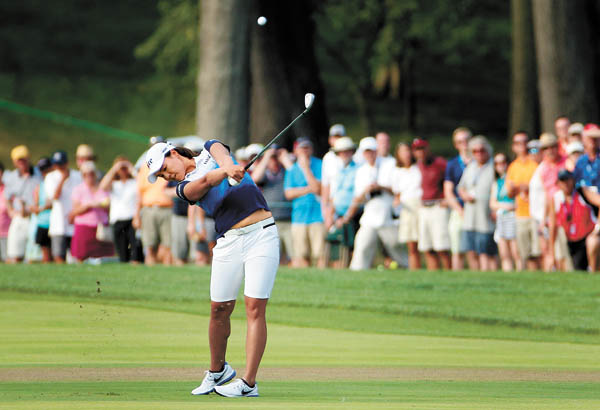 Chun In-gee hits her approach shot on the 18th hole during the final round of the U.S. Women’s Open at Lancaster Country Club, Sunday in Lancaster, Pa. Chun won the event at 8-under 272. [AP/NEWSIS]

Dumbo is flying high over a U.S. golf course after a big win Sunday.

Chun In-gee overtook her Korean compatriot Amy Yang in the final round at the 70th U.S. Women’s Open in Lancaster, Pennsylvania. It was her first appearance in this tournament, and she was playing by invitation because she is not yet a member of the Ladies Professional Golf Association.

Chun finished the final round with a 4-under 66 and at 8-under 272 for the tournament which matches the championship scoring record set by Annika Sorenstam and Juli Inkster.

The 20-year-old, the money leader on the Korean LPGA Tour, became the first player to win her U.S. Women’s Open debut since Birdie Kim did it in 2005.

She is nicknamed “Dumbo,” she says, because of her curiosity and habit of listening intently to other people. She is the seventh Korean to win the U.S. Women’s Open; Pak Se-ri first did it in 1998. Korean women have dominated the tournament in recent years, taking six of the last eight editions.

This is also Chun’s first victory on the U.S. Tour. She played in four other U.S. tour events this season; her best finishes were at the HSBC Women’s Champions and the JTBC Founders Cup, where she tied for 37th place.

``Everything I faced and I did here was completely new,’’ Chun told the Associated Press. ``So all I did was enjoy the new stuff...I enjoyed it and had a lot of fun. Even though I’m Korean, American fans supported me here a lot and they gave a lot of claps. That put me in a great rhythm of play and I enjoyed that tournament rhythm.’’

The victory also gave Chun a U.S. major title to go with ones she earlier claimed in Korea and Japan.

In 2013, the North Jeolla native claimed the Korean Women’s Open as a rookie, and this May, she won the World Ladies Championship Salonpas Cup on the Japanese LPGA Tour, becoming youngest champion there.

Chun has earned more than 1.5 billion won ($1.3 million) so far this season after adding $810,000 for her victory in Lancaster. She collected 559 million won for her three wins in the KLPGA Tour and 240 million yen for the Salonpas Cup victory in Japan.

``With those four wins this year, I had a lot of confidence coming into this tournament,’’ said Chun, whose win boosted her to the world’s No. 10. ``And that’s why I could enjoy every moment of the tournament.’’

Chun is a seven-time winner on the KLPGA Tour. She first played golf as a fifth grader in the Seosan Daejin Elementary school after her father, a former taekwondo athlete, noticed her persistence and effort in swinging golf clubs.

Although her school opposed the idea of Chun playing golf because she was also good at math, her father decided to raise her as a golfer, moving to Jeju Island and South Jeolla for a better golfing environment.

Chun first made a splash in 2010 by winning the MBC Mediatech Youth Golf Tournament. She joined the national team the following year before turning pro in 2012 to play in the second division tour.

Third-round leader Amy Yang struggled in the middle of her round and then pulled within one by going eagle-birdie at Nos. 16 and 17. But she bogeyed the 18th and fell a stroke short of Chun.

Playing in the final group on the last day of the championship for the third time in four years, Yang squandered a three-stroke lead and settled for a 1-over 71 and second for the tournament at 273.

Two-time champion and top-ranked Park In-bee (67) overcame putting woes and rallied late, tying for third with Stacy Lewis (70) at 5-under 275.

Defending champion Michelle Wie battled hip and leg injuries and limped in with an even-par 70, placing 11th at 2-under 278.

As Yang and Lewis were drawing most of the fans’ attention as the last grouping, Chun went about methodically picking up strokes on the leaders. At 4 under heading into the final round, she picked up two strokes on the front nine, closing within two of the lead.

``I knew it wasn’t going to come down to the two of us,’’ Lewis said. ``I knew somebody was going to shoot a number to get up there.’’

Chun got within a stroke with a birdie at the 12th, and then rolled in a nine-foot putt at No. 15 for the first of three straight birdies. She moved into the lead with a birdie at 16 as Yang and Lewis struggled. She added another birdie at the 17th to stretch her lead to two strokes. At the troublesome 421-yard, uphill closing hole, Chun drove into the rough, chipped short and went on to make bogey, falling into a tie for the lead with Yang, who birdied 17.

But Yang failed again in her bid to claim the biggest prize in women’s golf. She also drove into the rough at the last hole, chipped short of the green and failed to get up-and-down for par, giving Chun the win.

``I did my best out there today,’’ Yang said, thinking about another disappointing outing. She had been tied for the lead heading into the final round of this tournament in 2014 and was second after 54 holes in 2012. She tried to put another failed final round into perspective.

``It was another good experience,’’ she said. ``It just didn’t go as well as I thought, but I learned another great lesson here. And it’s going to make me a better player, improve my game.’’

Lewis’ bid for her first U.S. Open title was foiled by a pair of double-bogeys, with the most costly one coming at 15, a hole after she had moved into a tie for the lead. At the 15th, she drove into the rough, hit her second shot through the fairway, and then dumped her third shot into a greenside bunker before taking a 6 and falling out of contention.

``I’ll get over this eventually, but it will take a day or two,’’ Lewis said.