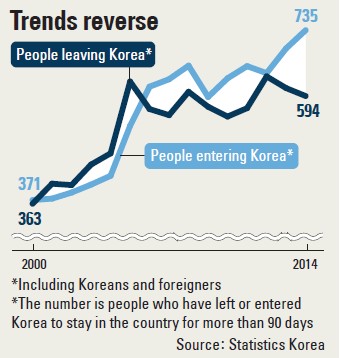 More people are choosing to stay in Korea compared to the past, government statistics showed, including both natives and expats.

Young Koreans are increasingly staying in their homeland as the number of students relocating abroad for study declines. Studying overseas is no longer considered the ticket to success as it was in the past.

In terms of foreigners, the Korean working environments have improved - including the behavior of bosses - resulting in more moving to Korea for jobs.

A report released by Statistics Korea on Thursday showed that the number of Koreans and foreigners who entered Korea in 2014 surpassed the number of people who left.

The difference, about 142,000, was the biggest since the government started collecting data in its current form in 2000.

Koreans traveling abroad for shorter visits and foreign tourists staying in Korea for less than 90 days were not included, she added.

In the early 2000s, Korea had more people leaving the country than entering. The trend started to change in 2006, when the number entering exceeded the number who left for the first time.

In 2014, there were fewer Korean nationals leaving the country than coming in, particularly young people in their teens and 20s.

Between 2006 and 2008, the number of Koreans who left the country reached its peak in most age groups, but largely because of the craze for studying abroad.

“The number of Korean students attending elementary, middle and high schools abroad reached its peak at about 30,000 in 2006, but it declined to about 12,000 in 2014,” said Yoon. “Also, fewer Korean university students are leaving the country to study abroad since 2011.”

On the other hand, the number of foreigners staying in Korea for over 90 days in 2014 was more than those who left the country that year in all age groups.

“The number of foreigners is increasing in Korea, with an improvement in working conditions and eased immigration regulations,” said Yun.

About 72 percent of foreign immigrants who came to Korea in 2014 were Chinese, Thai, Vietnamese or U.S. citizens. More than 40 percent of them came here to work.